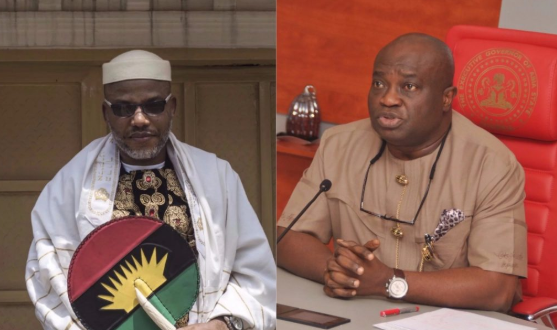 Leader of the Indigenous People of Biafra, IPOB, Nnamdi Kanu, in his New Year message, hit out at Gov. Ikezie Ikpeazu of Abia State, declaring that his re-election bid on the platform of the Peoples Democratic Party would end in smoke.

“If there is something we are certain of in 2019, it is the fact that voting will be boycotted starting with the presidential elections. Okezie Ikpeazu will be removed from office as the governor of Abia State for the role he played in initiating Operation Python Dance that killed hundreds of our men.

“This same Okezie Ikpeazu is responsible for the illegal detention without trial of Biafran Jews, a crime for which he will never be forgiven. The order to tear down every poster and disrupt every rally organized by Okezie Ikpeazu still stand and IPOB is under instruction to ensure that he is comprehensively disgraced at the polls.

“Anybody associating with Okezie Ikpeazu is an enemy of the people. No amount of state sponsored rigging through INEC will save him from the ignominy that awaits him,” the fugitive wrote in part in the goodwill message.

Share
Previous Lagos DJ Commits Suicide as Father Poisons Kids in Bayelsa
Next ‘You are Deceitful, Desperate and Deceptive’, Keyamo Lashes at PDP