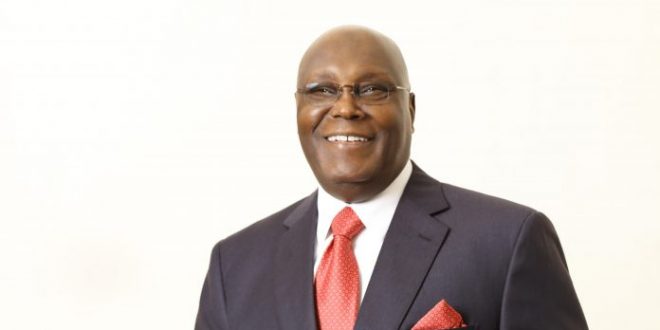 he Presidential candidate of the Peoples Democratic Party, Atiku Abubakar, has accused President Muhammadu Buhari of preventing the report of the committee on arms procurement from being made public.

The former Vice President also chided the Federal Government for devoting all it’s attention to Buhari’s reelection campaign at the expense of the Boko Haram crisis that has continued to consume the lives of innocent citizens.

A statement signed by Atiku’s Special Assistant on Public Communication, Mr Phrank Shaibu, said it was strange that Buhari who promised to address corruption still had not taken into account the report prepared by the committee set up by Buhari himself to investigate corruption in military procurement (from 2007 to 2015), to the point where it has totally compromised the Nigerian Armed Forces’ ability to address the Boko Haram conflict.

The statement appears to echo the published report of Washington-based group, International Strategic Studies Association, which stated that the death of a former Chief of Defence Staff, Air Chief Marshal Alex Badeh, and that of a former Chief of Administration of the Nigerian Army, Maj.-Gen. Idris Alkali, was not a mere coincidence.

ISSA, a non-governmental organisation with a worldwide membership of professionals involved in national and international security and strategic policy, stated in a special report on Friday that the two men were killed to hide what it described as the pattern of corruption in the current military leadership in the country.

Specifically, the report alleged that Badeh was murdered to prevent him from divulging in court details of corruption which it said had grown even more rampant in the current defence leadership.

While equally lamenting that some members of the arms procurement panel had been killed, Atiku stated: “We are all witnesses to the fact that a member of the committee, Rear Admiral Daniel Ikoli, the Fleet Commander, Western Naval Command, Lagos, was assassinated on April 5, 2017.

“He had earlier been threatened, and subsequently murdered. The secretary to the committee was attacked with gunfire in his car, but survived.”

The statement also notes that if the President had spent half of the resources and time he had devoted to his reelection project on the Boko Haram crisis, the crisis would have been resolved while hundreds of precious lives would have been saved.

The statement further reads: “There is no gainsaying that Buhari has got his priorities wrong and has acted in a manner that suggests a total disregard for human lives.

“Or how else does one explain a situation where citizens, including security agents, are being hacked down daily by the Boko Haram insurgents and all the government is doing is to waste time and resources on an undeserving reelection bid?’’

The statement alleges that the President Buhari administration had “completely lost control of the engagement with Boko Haram and can show no instance when the military had any dominance of any aspect of the conflict.”

“It is now apparent that those saddled with ensuring the security of lives and property in the country are grossly incapable of doing so. The current APC government lacks what it takes to prosecute the Boko Haram war with the kind of vigour and precision that it deserves,” the statement said.

Atiku noted that no significant economic or political progress could be achieved in Nigeria until the issue of the Boko Haram insurgency was resolved.