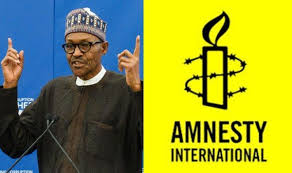 December 18, 2018 Comments Off on CACOL Condemns Intimidation of Amnesty International By FG 41 Views

The continuous intimidation and threats to Amnesty International, Nigerian Chapter, is a misguided action and has the potentials of undermining our hard-won democratic rule. This becomes more worrisome when viewed against the backdrop of the Nigerian Army’s accusation of bias against the international human rights organization which was followed by similar riposte by the Presidency through the spokesman to President Muhammadu Buhari, Garba Sheu, who accused the respected organization of attempts at damaging the morale of the Nigerian Army.

In a press release issued by CACOL, the Executive Chairman of the anti-graft group, Mr. Debo Adeniran noted, “Since the advent of the present government in year 2015, the Amnesty International (AI) has reported in a most graphic form much of the carnage and dastardly murders, kidnappings, etc. of innocent Nigerians carried out by Boko Haram, one of the most vicious and renegade terrorist groups in the world that operates mostly in Nigeria. In its 2016 report, ‘Boko Haram carried out at least 65 attacks causing 411 civilian deaths, and abducted at least 73 people. Sixteen women, including 10 policewomen, were abducted in June when Boko Haram ambushed an army-escorted convoy on the Maiduguri-Damboa road. In July, Boko Haram ambushed a team of oil prospectors in a village in Magumeri. Three oil workers were abducted and at least 40 other people were killed, including soldiers and members of the Civilian Joint Task Force. On 6 May, 82 Chibok schoolgirls, abducted in 2014, were released by Boko Haram fighters in an exchange deal; 113 girls remained in captivity. In November, six farmers in Dimge village in Mafa were abducted and beheaded’.

“Recent reports also chronicled some of the abuses of human rights by the Nigerian Army, either as retaliatory or unconscious reaction to the frustration of the elongated war Against Terror, ‘There remained at least 1.7 million internally displaced people (IDPs) in the northeastern states of Borno, Yobe and Adamawa; 39% lived in camps or similar settings and 61% in host communities. The UN said that 5.2 million people in the northeast remained in urgent need of food assistance; 450,000 children under five were in urgent need of nutrition. In July, Doctors without Borders reported that 240 children had died from malnutrition in Borno state. On 17 January, the Nigerian Air Force bombed an IDP camp in Rann, headquarters of Kala Balge local government, in Borno state, killing at least 167 civilians, including many children. The military said the bombing was an accident as Rann was not identified as a humanitarian camp.’ After much hoopla and formal complaint to the International Criminal Court (ICC) of United Nations concerning human rights abuses of the Nigerian Army at the World Headquarters of the ICC at Hagues, the Federal Government in August, under acting President Yemi Osinbajo set up a presidential investigation panel to probe allegations of human rights violations carried out by the military. Between 11 September and 8 November, the panel sat in the capital, Abuja, and in the cities of Maiduguri, Enugu, Port Harcourt, Lagos and Kaduna. In its December preliminary report, the Office of the Prosecutor of the ICC announced that it would continue to assess the admissibility of the eight potential crimes it had previously identified as having been allegedly committed in Nigeria.”

The CACOL Boss also said, “Considering our history under the various military regimes in the country and the role International human rights organizations played in curbing abuses and the role they still play till date in ensuring that the military, anywhere in the world, adheres strictly to the Rules of Engagement even in the heightened state of terror and casualty dealt to our gallant fighting men and women, we advise that military authorities should duly embrace those conventional rules while they must cultivate a good working relationship with cognate organizations, both operational in the country and at the international for a for better understanding of whatever challenges that may crop up in the course of securing the nation against terror or any other threats to nationhood. This becomes imperative as Nigeria cannot operate in isolation of the global best practices and expect the entire world to continue to play the ostrich under the pretext of ‘territorial integrity’”.