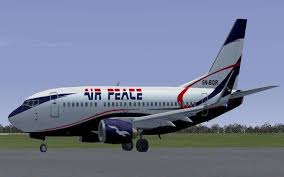 Air passengers flying Air Peace suffered mid-air discomfort weekend as what should have been a smooth, less than an hour flight turned to an endless, agonising flight as the cooling system of the aircraft deployed on their Lagos- Enugu route packed up, leaving the teeming passengers in agony.
Passengers had boarded the flight refreshed and radiant until the cookie crumbled leaving them perturbed, terrified and in total confusion as to what would be their fate as the ill-fated aircraft dragged on to destination.
Fear set in few minutes after take-off as some passengers noticed that the expected cool atmosphere in an aircraft was missing as heat gradually dominated the craft.
What started like a child’s play later transmuted into a choking heat leaving air passengers’ agitated with their faces sweat glistening and animated, as they engaged in all manners of prayers and tongue speaking in dire desperation to coast safely to destination
Air Peace has prided itself as one of the best domestic airlines in Nigeria despite array of complaints from several quarters over series of deficiencies in passengers’ handling and logistics
Many passengers have complained of flight delays and off-hand handling of passengers by an airline which claimed it could stand in as the national carrier
The management of the airline have on several occasions condemned the bid to set up a national carrier by the Federal Government, claiming that Air Peace has what it takes to fly the flag of the country in the sector
The airline hinged its capability on the number of fleet it operates and the additional brand new aircraft it is expecting to join the existing ones
But a aviation pundit who spoke on condition of anonymity said ability of an airline to be national carrier is more on operational expertise and not the size of fleet
A national carrier, it is said, must be pace setter in the areas of customers relations, fleet maintenance and sound administrative capabilities
Meanwhile the airline, in a release, has apologised to its passengers over the disruption of their flights on different routes on that Friday explaining that it was caused as a result of depressurization on one of its flights.
A statement issued by the airline’s Corporate Communications Manager, Chris Iwarah said some of the carrier’s scheduled flights were disrupted due to a depressurization challenge on its Lagos-Enugu flight, which compelled it to declare the aircraft unserviceable in line with its uncompromising stance on matters of safety.
The airline said it regretted the resultant delay of flights on several routes the aircraft was scheduled to service, assuring that it had made arrangements for other aircraft in its fleet to salvage the situation.
“On Friday, December 14, 2018, our Lagos-Enugu flight had a depressurization challenge, compelling us to declare it unserviceable upon safely landing at destination in line with our strict safety standards. Although depressurization is a common occurrence in aviation, we sincerely regret that the incident led to the disruption of our Enugu-Lagos service and other flights the aircraft was scheduled to operate. We are indeed sorry for the resultant inconvenience caused our esteemed customers.
“We have, however, made alternative arrangements to ensure the operation of the Enugu-Lagos and other services the aircraft was scheduled to do, while our team of engineers conduct proper checks on the aircraft, which has since been ferried to our base.
”We assure members of the flying public and our crew that we will continue to accord their safety a prime place in our operations and always act in their best interest. We urge our valued customers to continue to trust us to deliver the best flight experience to them.
“We quite understand the expectations of our esteemed customers, especially during the Yuletide and we wish to assure them that we will neither disappoint nor take their patronage and loyalty to our brand for granted,” Air Peace said.
By Gboyega Adeoye