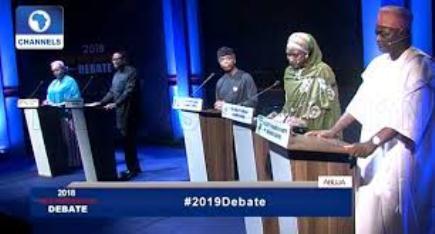 The vice-presidential candidates debate for the 2019 general elections kicked off at the Transcorp Hilton Hotel, Abuja on Friday, with five candidates’ participation.

Featuring were Ganiyu Galadima of the Allied Congress Party of Nigeria (ACPN); Khadija Abdullahi-Iya of the Alliance for New Nigeria (ANN), and incumbent Vice President, Yemi Osinbajo of the All Progressives Congress (APC).

The other two were Peter Obi of the Peoples Democratic Party (PDP) and Umma Getso of the Young Progressives Party (YPP).

In his opening statement, Galadima said and urged Nigerians to look at the candidates and their manifestos to make informed choices at the polls.

Abdullahi-Iya opened with personal background information, including holding a first and masters degree in law from the University of Abuja, and founding a Non-governmental Organisation devoted to women and children.

The ANN vice presidential flagbearer said she believed all Nigerians should be concerned about the plight of children to secure the country’s future.

She stated that her decision to run for the office stemmed from her concern about “everyone of the over 2.1 million children in the North-East and IDP camps scattered across Nigeria’’.

On his part, Osinbajo started by reeling out achievements of the President Muhammadu Buhari administration in the areas of infrastructure, employment, agriculture

He said the government had embarked on the largest infrastructure project in the country’s history, including railways between Lagos and Kano, Aladja-Warri, and the Lagos-Calabar road.

The APC candidate said the Buhari administration had a major road project in every state of the federation.

On agriculture, Osinbajo stated that the government had made giant strides, especially by cutting the nation’s rice import by 90 per cent.

He added that the social investment programme of the current administration was possibly the largest in the history of the country, taking N500 billion in every cycle.

“Under the N-Power scheme, we are employing 500,000 graduates, who are in every single local government of the country.

“At the same time, we have the homegrown school feeding programme under which 9.2 million children are fed every single day in 26 states of Nigeria,’’ he said.

On his part, Obi said“Our country today has the highest number of out-of-school children in the world; our HDI (human development index) has dropped from 152 to 157; our global competitive index has dropped from 124 to 127.

“In terrorism, we have moved from seven to three behind Iran and Afghanistan; our inequality has worsened, our misery index,’’ he said.

Getso said in her opening statement said she was passionate about girl-child education, adding that she “spent the early years of my adulthood in the development of a common Nigeria’’.

The YPP vice presidential hopeful said she was a pioneer member and founder of a women multi-purpose cooperative society in Bauchi State that had impacted the lives of a lot of rural women in the state.

Getso said her presidential candidate, Mr Kingsley Moghalu, was a person with a lot to offer in terms of service to the nation.

“If you compare all the choices we have, you can see that Moghalu is among the best because he has experience in all sectors of the economy,’’ she said