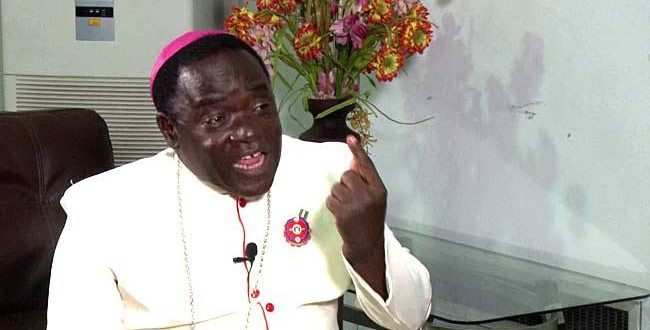 December 12, 2018 Comments Off on Atiku was duly invited-Kukah 15 Views

Dr. Matthew Hassan Kukah, Catholic Bishop of Sokoto and a member of the National Peace Committee, NPC, Tuesday, debunked the claim by Alhaji Atiku Abubakar that he never got any invitation to the signing of a peace accord for next year’s general elections.

The event held at the International Conference Centre, Abuja, with President Muhammadu Buhari in attendance.

In a report monitored on Channels Television, Tuesday evening, Kukah declared: “I have here with me a copy of a letter which was sent to all political party chairmen announcing this event.”

“This is a letter that was sent which was acknowledged in the office of Prince Uche Secondus, the Chairman of the PDP,” he added, showing the letter to the anchor of the station’s political programme, Politics Today.

President Muhammadu Buhari and some other presidential candidates signed the agreement to maintain the peace before, during and after the polls, at the event organised by NPC.

The accord also stipulates that all parties must run issue-based campaign; refrain from speeches that would incite violence, and support the Independent National Electoral Commission, INEC, to ensure a free, fair and credible electoral process, among others.

Bishop Kukah particularly noted the conspicuous absence of Atiku but observed that there might have been a communication problem. He, however, promised that the committee would initiate steps to remedy the situation

Kukah also told the TV station that as he was stepping out of the venue, a gentleman accosted him, saying his presidential candidate got to the event late due to flight delay on his way to Abuja.

Kukah then summed up everything and advised presidential candidates who missed the event to seek redress at the office of the NPC, assuring that the committee was open to any complaint.

“I think the most important thing is that we will try and do everything possible; these things happen,” he said. “I am happy that it was just a question of an administrative error on the part of their (PDP) secretariat.

“But the office of the peace committee will remain open for anybody else who, either due to communication problems,(or whatever) didn’t actually get their letters of invitation.”