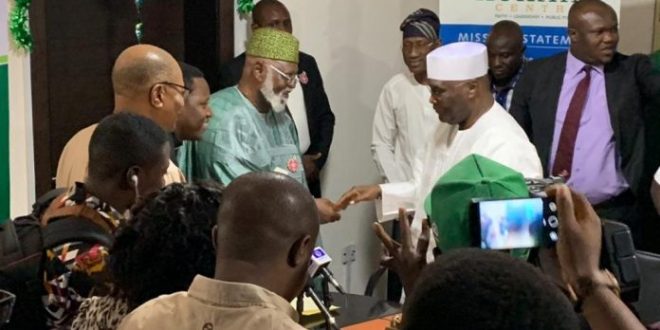 December 12, 2018 Comments Off on At Last! Atiku, Ezekwesili Sign Peace Accord 30 Views

Less than 24 hours after President Muhammadu Buhari signed a peace accord ahead of 2019 elections, the candidate of the Peoples Democratic Party (PDP), Alhaji Atiku Abubakar, who was absent at the ceremony has also signed the document.

The candidate of Allied Congress Party of Nigeria (ACPN), Obiageli Ezekwesili who also did not attend the ceremony on Tuesday, has also signed the peace accord.

The candidates in separate visits on Wednesday signed the Peace Accord at the office of the National Peace Committee (NPC) in Abuja.

Atiku, while signing the peace accord said that he is committed to free, fair and credible election.

Those who accompanied Atiku to the signing event include his running mate Peter Obi; the PDP national chairman, Uche Secondus; former governor of Ogun State, Gbenga Daniel; among others.

Ezekwesili while signing the agreement also called on President Buhari to sign the electoral act amendment bill saying that is the only way to assure Nigerians that he is ready for free and fair elections in 2019.

The National Peace Accord is convened by eminent Nigerians and led by a former Head of State, General Abdulsalami Abubakar.