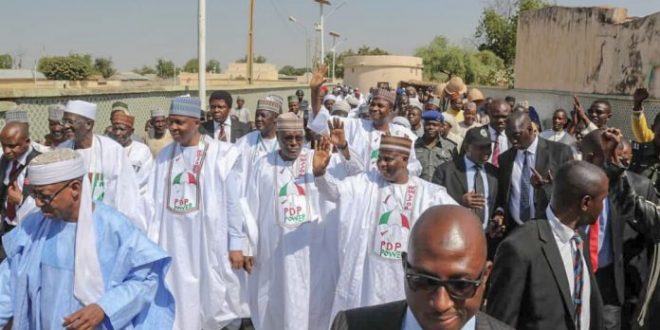 Thousands of Peoples Democratic Party (PDP) supporters, on Monday, thronged Sokoto State and its environs in colourful attires and motorcades for the launching of the North-West zonal campaign of the presidential candidate of the party, Atiku Abubakar.

Among the dignitaries present were former Deputy Governor of Sokoto State, Alhaji Muntari Shagari, Chairmen of PDP in the seven states in the zone as well as members of State Houses of Assembly elected on the platform of the PDP and all leaders of the party in the zone.

The campaign is being moderated by Dino Melaye, the senator representing Kogi west senatorial district, who was recently appointed as one of the eight spokespersons of the campaign.

Atiku arrived the city at 2pm and proceeded to the Kangiwa square along with other leaders of the party.

Those who came in company with the candidate were officials of the party from the seven states in the North-West comprising Sokoto, Zamfara, Kebbi, Jigawa, Katsina, Kano and Kaduna.

A number of former and current governors of northern states have addressed the crowd, asking them to vote out the current administration, led by President Muhammadu Buhari.

While giving his address, Dogara said Nigeria is not safer today than it was in 2015, and that the economy has since deteriorated, asking the people to kick out the Buhari administration.

On his part, Jonathan declared that only Atiku can make Nigerians eat well three times daily, asking the people to vote for the party.