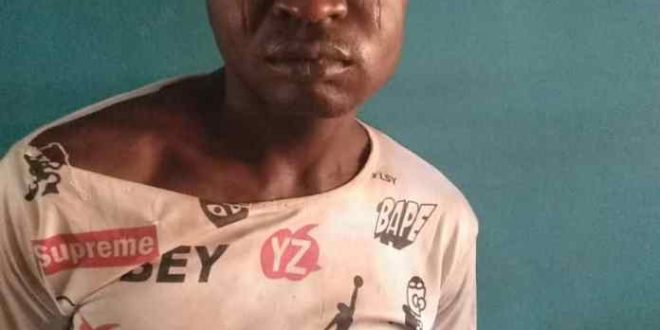 A jobless man who felt he was losing grip on his wife has allegedly beaten the woman to death in Ogun State.

It was learnt that the 38-year-old man, Shina Kasali, was arrested by officers in Ogun State after he had beaten his wife, Sofiat Kasali, to death for allegedly disobeying him and accusing him of sitting outside to watch a prostitute’s flaunting her private part nearby.

The suspect who lives in Abosule area of Agbado in Ifo Local Government Area was arrested on December 1, after a neighbour, Tunde Babatunde, reported the matter at Agbado Divisional Police Headquarters.

According to a statement from Ogun State police spokesman, DSP Abimbola Oyeyemi, Babatunde reported that the couple had a minor disagreement when the wife wanted to go and fetch water and the husband ordered her not to go yet.

The argument allegedly led to a scuffle between the two, during which the wife was beaten into a state of coma and later died while being rushed to the hospital.

Oyeyemi stated: “Upon the report, the DPO Agbado Division, CSP Olatunji Omonijo, quickly led his detectives to the scene where the suspect was apprehended. On interrogation, the suspect claimed to be a butcher and that he has been out of a job for some months now and the wife was taking advantage of that to disrespect him.

“He explained further that on that fateful day, he was sitting down outside when the deceased came to accuse him of looking into the private part of a prostitute who sat at the opposite direction and that was what led to the disagreement that resulted to the death of the deceased.”

Police said that the corpse of the victim had been deposited at Ifo General Hospital morgue for post-mortem investigation.

Meanwhile, the Commissioner of Police (CP) Ahmed Iliyasu, has ordered the immediate transfer of the case to the homicide section of the State Criminal Investigations and Intelligence Department for further investigation.