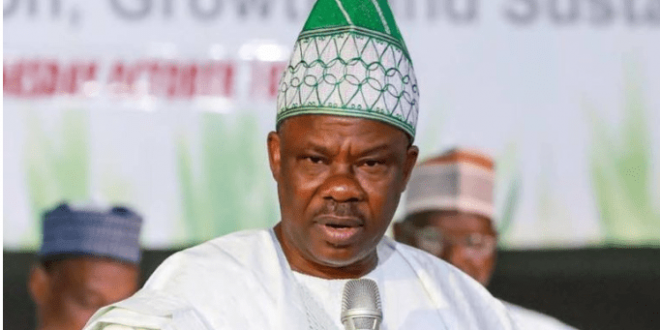 Ogun State governor, Ibikunle Amosun, has said he would remain a member of the All Progressives Congress (APC).

Speaking today in Abeokuta, Amosun said he would contest the senatorial election in 2019 under the platform of APC and would also work for the re-election of President Muhammadu Buhari.

The governor however, said he would not disown his loyalists in APC who defected to the Allied People’s Movement (APM).

Amosun made his position known at a stakeholders meeting of the APC which was attended by his preferred governorship candidate and the flagbearer of APM, Adekunle Akinlade.

The governor’s declaration came as 26 aggrieved candidates of the APC loyal to the governor announced their defection to the APM.

Amosun said he had tried his best to stop the defection of Akinlade and other aggrieved candidates.

He vowed to use everything within his capacity to ensure the success of Akinlade and other aggrieved members in their new party.

Amosun also said that he would not support the governorship candidate of the APC, Dapo Abiodun.

“When these people came, they told me they are leaving the APC, I said ‘no’ but I couldn’t stop them. In fact, Akinlade has my full support.

“I remain in APC because that’s what those people want, they want us to leave APC but they are joking.

“I will stay in APC to ensure that Buhari wins in Ogun State and to let them know that they can’t subvert the will of the state.

“Every day, I will campaign for President Muhammdu Buhari, we will do everything possible to ensure Buhari wins massively in Ogun, but they should not miss it.

“I, Sen. Ibikunle Amosun, will not support anyone they are bringing,” he said.