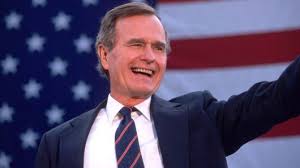 December 1, 2018 Comments Off on Former US President George HW Bush Dies at 94 5 Views

George HW Bush, the 41st president of the United States and the father of the 43rd, who steered the nation through a tumultuous period in world affairs died Friday night at his home in Houston. He was 94.

Mr Bush was denied a second term in the White House after support for his presidency collapsed under the weight of an economic downturn and his seeming inattention to domestic affairs.

His death, which was announced by his office, came less than eight months after that of his wife of 73 years, Barbara Bush.

Mr Bush had a form of Parkinson’s disease that forced him to use a wheelchair or motorized scooter in recent years, and he had been in and out of hospitals during that time as his health declined.

President Michael D Higgins said people in Ireland had learned with sadness of the death of former president.

“President George Bush will be remembered for his long life of public service to the people of the United States and as a president who led his country at a period of significant change at national and global level, between the end of the 1980s and mid-1990s – a period of deep challenges to the multilateral institutions.

“On behalf of the Irish people I offer our deepest sympathies to his family and to the people of the United States.”

Mr Trump issued a statement less than an hour after Mr Bush’s death being announced and the White House lowered its flag to half mast.