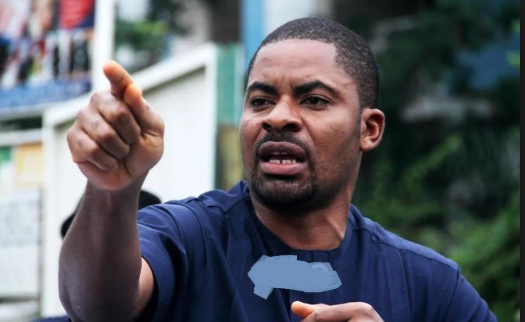 Adeyanju was arrested on Wednesday while leading a protest tagged ‘Police Are Not Politicians, Save Our Democracy’ in Abuja.

“Imagine he (Adeyanju) called the number one and number two citizens ‘Ole Ole’. This can incite violence,” Jimoh said.

Earlier, the police spokesman released a statement justifying while the trio were arrested.

It reads in part: “Deji Adeyanju, Daniel Abobama and Boma Williams were arrested by the Police within the powers provided under the constitution, Police Act and Regulations, the Penal Code Law and Procedures to prevent crime and ensure safety of all Nigerians. The Constitutional rights of every Nigerian as stated in first paragraph above i.e Sections 38, 39, 40 and 41, these rights are not absolute as section 45 of the same Constitution provides for derogation to these rights.

“Deji Adeyanju, Daniel Abobama and Boma Williams contravene the law and were arrested for Criminal Conspiracy, Joint Act, defamation of character, public nuisance, disobedience to order duly promulgated by public servant, disturbance of public peace, inciting public disturbance, threat to public security and safety, criminal defamatory and derogatory conduct against constituent authority and breach of law and order under sections 96, 113, 114, 152, 183 and 391 of Penal Code law. They are already arraigned in court in Abuja for prosecution.

“For avoidance of doubt, attached are the exhibits recovered from Deji Adeyanju, Daniel Abobama and Boma Williams and some of the criminal defamatory comments and utterances, that is capable of inciting public disturbance, threat to public security and safety, criminal defamatory and derogatory conduct against constituent authority and breach of law and order pasted by Deji Adeyanju on his Facebook page.

Share
Previous Ijaw Youths Call for Signing of FID for Zabazaba Deep-water Project
Next Even in Death, Inspector who Killed LASTMA Official to be Tried