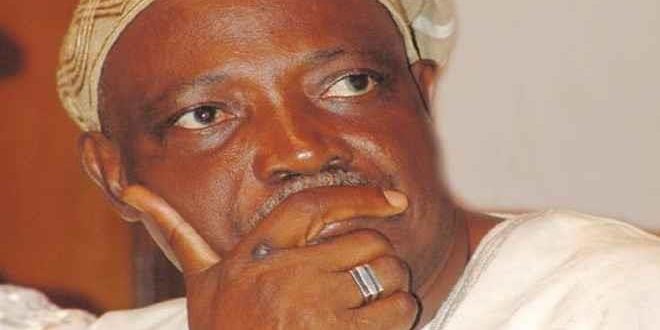 Former governor of Oyo State, Chief Rashidi Ladoja mounted the witness box at a Federal High Court on Tuesday to testify in his eleven years old trial for a N4.7 billion fraud preferred against him by the Economic and Financial Crimes Commission (EFCC).

EFCC has been prosecuting Ladoja alongside his Commissioner for Finance Waheed Akanbi, since 2007.

The anti-graft agency accused Ladoja and Akanbi of conspiring between themselves to divert N4.7bn out of the funds realized from the sales of shares of Oyo State in some banks.The defendants pleaded not guilty to the charges.

Led in evidence by his lawyer, Mr Bolaji Onilenla, Ladoja said his travail began in 2005 when his political godfather, the late Lamidi Adedibu, demanded that the security votes for the state should be handed over to him. He said following his refusal to hand over to the late Adedibu the Oyo State security votes, the late strong man of Ibadan politics organised some members of the Oyo State House of Assembly to impeach him.

Ladoja said: “The group that called for my impeachment was led by the late Alhaji Lamidi Adedibu. The politician believed he had a right to security votes because he was securing the state but I thought otherwise. It was a running battle until I later found out that the Presidency was involved. Some members of the state House of Assembly were promised a lot of things by Adedibu. I later got to know that my deputy(Chief Alao-Akala) was also involved in the plot to remove me.”

Ladoja said following his removal from office, one of his aides, Chief Adewale Atanda, advised him to leave the state to avoid a threat to his life and he left for Lagos.

The ex-governor said the shares, whose proceeds he was accused of diverting, were purchased by his administration. He said contrary to the allegation by the EFCC, proceeds from the sales of the shares were used to finance the 2006 budget of the state after his impeachment was nullified by the court.

Ladoja said, “On our return to office, we found out that most of the items we had in our budget in 2006 were not touched. We were then looking for money and the second defendant, who was the Commissioner of Finance, was saddled with the responsibility of looking for the money. He then came up with the idea of selling the shares. We later called functionaries at the Ministry of Commerce but they told us that the shares had been tied down to the purchase of rice;

We then found a way of freeing the shares; and at that point, the second defendant made his submissions to the State Executive Council on the sale of the shares and it was approved. A memo was later raised by the Commissioner of Finance and I approved it. I had no dealings with either the portfolio manager, Fountain Securities Ltd, or its Managing Director, Chief Kola Daisi.”

Justice Mohammed Idris adjourned till January 18, 2019, for final written addresses after which a date would be fixed for judgment.