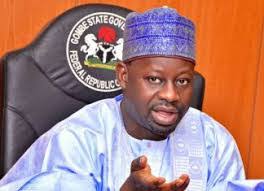 Governor Ibrahim Dankwanbo of Gombe State is in the news for the wrong reason over allegation that his cook at his Kaduna residence, Mr. John Okon, was beaten to death by men of the Federal Special Anti-Robbery Squad (FSARS) for allegedly stealing his television sets.

The 32-year-old, whose widow is pregnant with their child, according to the bereaved family’s lawyer, Sunny Olorunmola, lived with his spouse at Dankwanbo’s residence located on Pola Road, off Swimming Pool Road, Kaduna.

The family has petitioned the Inspector General of Police seeking for justice.

The petition, according to Olorunmola reads in part: “We as solicitor to Mrs. John Okon who formerly resided and lived together with her husband now (deceased) within Gombe State Governor, His Excellency, Ibrahim Dankwanbo’s private Kaduna residence located on Pola Road, off Swimming Pool Road, Kaduna.

“Mr. John Okon died on the 13th day of November, 2018 as a result of gruesome serial multiple beatings and torture inflicted on him, while in the custody of men of the Nigeria Police (FSARS) headed by SP Jummai of Anti-Crime Department, Gabasawa, Police Headquarters Kaduna.

“Our client, now late, was employed as personal cook and housekeeper to the Gombe State Executive Governor, at his Kaduna residence as aforesaid, and has being serving the governor in that capacity for about one and a half years before the aforesaid incident, while at same time, lived in the boys quarters of the governor’s main private residence, until Thursday, 8th day of November, 2018 about 7a.m. when he woke up in the morning to attend to his daily domestic chores in the governor’s residence only to discovered that the house had been burgled, and four theatre TV sets were made away with by the burglars.

“He immediately, rushed back to his living apartment in the boys quarter to inform his wife and in their shock, both Mr. and Mrs. John Okon, alerted all the security guards and gardener, who all slept in the governor’s residence together with them, viz: Two uniform policemen and two other private security.”

It claimed that strangely Okon was accused of stealing the television sets prompting the invitation of men of the Federal Special Anti-Robbery Squad (FSARS) who tortured him until he fainted and was confirmed dead at the Barau Dikko Specialist Hospital in Kaduna metropolis.