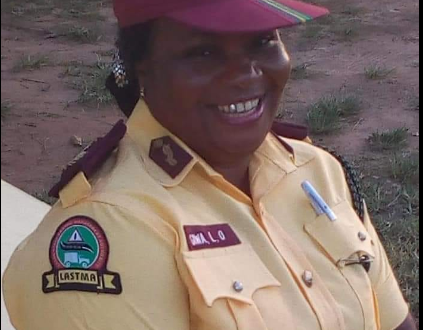 The deceased’s death occurred on Thursday at her Ikorodu residence. Apparently she suffered heart attack as she was at work the previous day with no visible sign of being sick.

Her death has cast a shadow over her daughter’s wedding billed for December.

One Tawa Ijaiya in a tribute to Late Giwa on the deceased’s facebook page wrote:  “Good Night my boss ,controller in Lastma and nice sister,l saw you on monday still discussing and praying for you for your daughter coming wedding in December.Hajia you told me after the wedding you will go to mecca to thank almighty Allah .

“Everyday you picked your preaching from holy Quran .Alhamdulillah and l know alijana fridaus is yours.Amen. l find it’s difficult to wish you good night since yesterday .Sun re is with Lateefat Giwa.”

According to LASTMA Public Relations Officer Hassan Mahmud, the late Giwa was full of life throughout Wednesday in the office till early Thursday morning when death came calling.