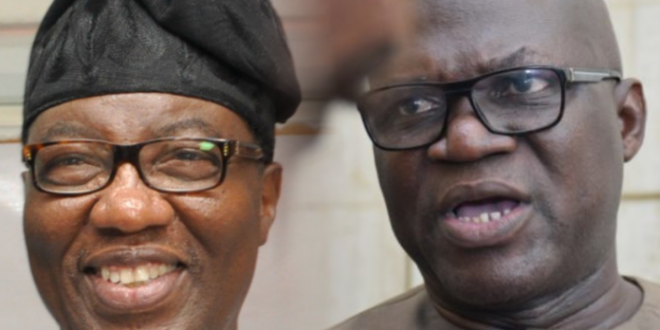 A former governor of Ogun State, Otunba Gbenga Daniel, a former presidential spokesman and newspaper columnist and TV anchor, Dr. Rueben Abati and Mr. Leke Shittu are being fielded as candidates of the Peoples Democratic Party, PDP, in Ogun State by the Senator Buruji Kashamu-led faction of the party, after a court ruling legitimized the group as the authentic Executive of the state chapter.

In the candidates’ list for the 2019 election accepted by INEC, Mr. Shittu was listed as governorship candidate with Dr. Abati as his running mate, while Otunba Daniel was listed as senatorial candidate for the Ogun East Senatorial District.

It will be recalled that INEC had written to the national headquarters of the PDP notifying the party of its decision to recognize and accept the candidates list submitted by the Kashamu backed Executive Committee.

A statement signed by Kashamu faulted the statement credited to the National Publicity Secretary of the PDP, Kola Ologbondiyan which faulted INEC’s decision.

“Former Ogun state Governor, HE Otunba Gbenga Daniel is for the Senate, Ogun East and all other candidates for the Senatorial, Federal house of Representatives and the State House of Assembly were equally accepted and duly acknowledged. Petroleum Products: Reps to probe increase in adulteration

“Any rumours being peddled around by our National Chairman and National Publicity Secretary through a purported press release should be disregarded as the duo are deliberately acting unlawfully and beyond their powers to which they’ve refused wise counsel to tow the path of rule of law. The guarantee of our democracy under established regulations and rule of law is that no party official, no matter how highly placed could use the office for selfish preservation/promotion of his own interests and legacy at the detriment of the interests and legacy of other party members. This resolve to act with unchecked impunity shall be fully resisted in a fight to finish battle to strengthen our party’s internal democracy.

“Ignorantly, the National Chairman is unaware that where there is dispute resulting into a judicial resolution as in Ogun state matter, the State Chairman and Secretary could sign in place of National Chairman and Secretary when backed by validly subsisting court judgements. Whatever makes our National Chairman to be this resolute at challenging the constituted electoral regulatory body, INEC and also dwelling in nauseating impunity against Nigerian court judgements out of unexplainable desperation to install Ladi Adebutu as PDP Ogun governorship candidate should as well have forced him to create his own INEC and conduct elections inside his office. The PDP as a Nigerian creation by law is for all Nigerians by established regulations and National statue; nobody can as such intimidate us in our democracy. 2019: Atiku’s group to rally voters for PDP in 774 LGAs.

“All the state elders, leaders and party faithful are again enjoined to continue and remain focused on the ongoing aggressive mobilisation and reconciliation efforts for our party, PDP to come out victorious in the forthcoming elections.”