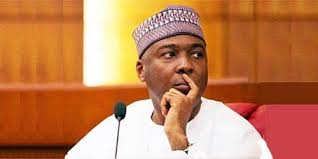 APC Formally Takes Control of all Senate Seats in Rivers

October 24, 2018 Comments Off on APC Formally Takes Control of all Senate Seats in Rivers 25 Views

With Wednesday’s formal defection of the Senator representing Rivers West, Osinakachukwu Ideozu from the Peoples Democratic Party, PDP, to the All Progressives Congress, APC, the ruling party has effectively locked in all three senate seats in the PDP controlled oil-rich Rivers State.

Majority Leader of the Senate, Ahmed Lawan, announced Osinakachukwu’s defection at the plenary.

Senator Lawan, who moved a motion for the adjournment of plenary till Nov. 6, welcomed and congratulated the defector to the APC.