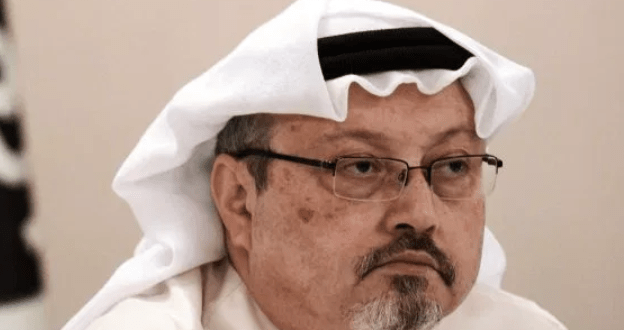 October 23, 2018 Comments Off on How Khashoggi’s Killers Tried to Cover Murder 29 Views

Surveillance video recorded by Turkish law enforcement appears to confirm reports that Saudi agents accused of carrying out the killing of Jamal Khashoggi used a body double as part of an attempted cover-up, the Washington Post revealed today.

The video — obtained and broadcast by CNN on Monday — purportedly shows a Saudi agent walking out of the Saudi Consulate in Istanbul wearing Khashoggi’s clothes, as well as spectacles and a fake beard, in an attempt to disguise himself as the slain Saudi journalist.

For weeks, the Saudi government had denied that it killed Khashoggi and said he walked out of the consulate after his Oct. 2 visit. The body double appeared to be an attempt to substantiate that denial, but the cover story fell apart, according to a diplomat familiar with the deliberations, because the video footage clearly reveals the body double’s flaws, mainly that he is wearing different shoes than Khashoggi wore when he entered the consulate.

“It was a flawed body double, so it never became an official part of the Saudi government’s narrative,” said the diplomat.

In New York, Jared Kushner, President Trump’s son-in-law and a White House adviser, said in a television interview Monday that he has advised Saudi Crown Prince Mohammed bin Salman to be “fully transparent” about the Khashoggi case. Kushner has cultivated a close partnership with the heir to the Saudi throne, who is widely suspected of being behind Khashoggi’s murder. Saudi authorities deny that Mohammed played any role in the plot.

Kushner declined to say whether he believes Saudi Arabia’s account that Khashoggi died accidentally inside the Saudi Consulate in Istanbul.

“I’d say that right now, as an administration, we’re more in the fact-finding phase,” Kushner said when asked about the death of Khashoggi in an interview at a New York event hosted by CNN. “Once we have all the facts, we’ll make an assessment.”

Turkish investigators allege that 15 Saudi agents murdered Khashoggi, a Washington Post contributing columnist who was living in exile in the United States, inside the Saudi Consulate in Istanbul soon after he entered it nearly three weeks ago.

Saudi Arabia claimed Saturday that Khashoggi, 59, accidentally died in the consulate following an altercation with a team that was sent to negotiate his return. But Saudi officials have so far refused to answer questions about what happened to Khashoggi’s remains, fueling already widespread condemnation of the killing.

The footage aired Monday — which appeared to show Mustafa al-Madani, 57, and an accomplice — further challenges the Saudi government’s explanations of what transpired in the consulate and in the hours after Khashoggi’s death.

A spokesman for Turkey’s ruling Justice and Development Party said Monday that Khashoggi’s murder was “complicated” and “monstrously planned.”

In a series of clips from closed-circuit television cameras, Madani is shown wearing the grey pants, light shirt and black jacket worn by Khashoggi before he entered the mission. He also appears to be wearing spectacles and a fake beard as part of the disguise.

According to records maintained by the Department of Homeland Security, Madani, who is suspected of working for Saudi intelligence, travelled to New York shortly before Saudi Crown Prince Mohammed was scheduled to arrive there as part of his U.S. tour this spring. Four users of a caller-ID app popular in the Arab world list Madani as working in intelligence and another describes him as working in the headquarters of the kingdom’s primary intelligence agency.

In the video, Madani arrives at the Saudi Consulate in Istanbul’s Levent district at around 11 a.m., wearing black and white sneakers and a blue plaid shirt, roughly two hours before the arrival of Khashoggi. Khashoggi went to the consulate that day on an administrative errand after consular employees told him that paperwork he needed for his marriage would be ready on Oct. 2, according to his family and friends.

Madani is shown departing the consulate about four hours later wearing Khashoggi’s clothing — except for his shoes. He is accompanied by another man wearing a black hooded sweatshirt and carrying a white plastic bag. The two suspects take a taxi to Istanbul’s Sultan Ahmet district, where they enter a bathroom, the images show. Madani emerges from the bathroom wearing the same plaid shirt he wore when he arrived at the consulate, and the two men dispose of the plastic bag, which Turkish officials believe contained Khashoggi’s clothes, CNN reported.

Later, the two are seen laughing as they approach an entrance to the Movenpick hotel.

The video was released as Turkish prosecutors prepared Monday to hear further testimony from at least five employees of the Saudi Consulate, local media reported. Investigators were reported to have already interviewed 20 employees, including the consul general’s driver, according to Turkey’s private NTV news channel. It was unclear whether any of the workers were direct witnesses to the incident.

Turkey’s state broadcaster, TRT, also reported that authorities discovered an abandoned vehicle they believe belonged to the Saudi Consulate. It was located in a private parking lot about 10 miles from the consulate grounds.

Turkish President Recep Tayyip Erdogan said Sunday that he would reveal details of the investigation on Tuesday, even as Saudi officials sought to head off growing criticism of the murder.

“The incident will be revealed entirely,” Erdogan said, according to the semiofficial Anadolu news agency.

The office of the Turkish presidency said early Monday that Erdogan and Trump spoke by phone the night before and agreed to “clear up the Jamal Khashoggi incident.”

A White House official confirmed that the call took place. Trump and his administration have emphasized Saudi Arabia’s status as a key U.S. ally.

John Hudson and John Wagner in Washington contributed to this report.