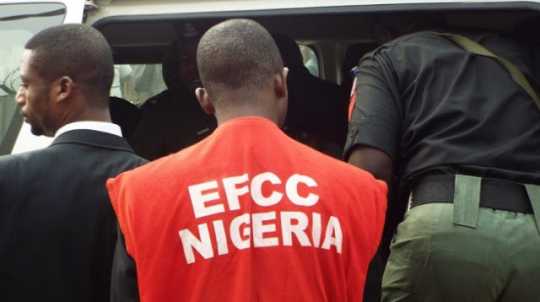 A Lagos Special Offences court was on Monday told how a defendant in a $200 million oil scam, Yusuf Yahaya Kwande jumped administrative bail granted to him by the Economic and Financial Crimes Commission (EFCC). The second defendant, Osahon Asemota was also absent in court.

The two defendants were billed to be arraigned before Justice Mojisola Dada with five companies, Trafigura Beheer BV, Trafigura PTE Ltd, Mettle Energy and Gas Ltd, Renbrandt Ltd and Jil Engineering and Oil Services Ltd, on a three-count charge of conspiracy to commit a felony, stealing and receiving stolen property proffered against them by the Economic and Financial Crimes Commission (EFCC).

Mr Adebisi Adeniyi, the prosecuting counsel for the EFCC, told the court that despite being served court summons all the defendants were absent in court. He noted that Kwande, the third defendant had also jumped EFCC bail.

“The third defendant (Kwande) is the alter ego of first and second defendant (Trafigura Beheer BV and Trafigura PTE Ltd).

“He was granted administrative bail and he jumped bail. It appears that he escaped out of the jurisdiction of the honourable court.

“The police is still and thoroughly searching for the third defendant and I hope that before the next adjourned date, the police would have been able to apprehend him,” Adeniyi said.

Mr Olabode Olanipekun (SAN) the defence counsel for Trafigura Beheer BV and Trafigura PTE Ltd however disputed the claims of the EFCC.

He said: “The prosecution’s claim that the third defendant (Kwande) is the alter ego of the first and second defendant (Trafigura Beheer BV and Trafigura PTE Ltd) is not correct.

“The third defendant has not been served as the alter ego of the first and second defendant and the proof of evidence has no reflection of this.

“The first and second defendant are foreign corporate entities and the charge was served on them outside Nigeria by courier, they responded because they did not want to ignore court processes and I got their response at 1am yesterday.

“Section 357 of the Administration of Criminal Justice Law (ACJL) would have been relevant if the other defendants were in court.

“If there are no proceedings today, its not as a result of the fault of the first and second defendants,” Olanipekun said.

Counsel for the other defendants, also explained to the court why their clients were absent in court for their arraignment.

Mr A. Aganmwonyi the counsel for Asemota, Mettle Energy and Gas Ltd and Renbrandt Ltd explained that Asemota was absent because of an ailment he contracted over the weekend.

” My client is the alter ego of the fourth and fifth defendant, he took ill over the weekend and was admitted at the Lagos University Teaching Hospital (LASUTH).

“He has heart problems and he requires a three-day bed rest at LASUTH,” he said.

Aganmwonyi presented to the court, a copy of a medical report from LASUTH as proof of Asemota’s illness.

Mr A. F Makun, the defence counsel for Jil Engineering and Oil Services Ltd told the court that a representative for the company will be in court at the next adjourned date.

“The Managing Director of the seventh defendant (Jil Engineering and Oil Services Ltd) is not in town.

“I believe by the next adjourned, we will sort everything out,” he said.

The EFCC alleges that the defendants committed the offences in 2008 in Lagos.

According to the charge sheet, the two defendants: Kwande and Asemota alongside Trafigura PTE Ltd, Mettle Energy and Gas Ltd and Renbrandt Ltd committed the offence of stealing between Oct. 22 and Dec. 15, 2008.

The EFCC alleged that at the office of Trafigura Beheer BV located at 20A Sinaro Daranijo St., off Ligali Ayorinde St., Victoria Island, Lagos, they fraudulently converted 6.4million metric tonnes of Automated Gas Oil (AGO).

The allegedly stolen AGO is worth $8.4million and belongs to Nadabo Energy Ltd.

Another company – Jil Engineering and Oil Services Ltd, allegedly fraudulently received the stolen AGO which had been under the legal custody of Spring Bank, Victoria Island, Lagos.

The case was adjourned until Nov. 5 for arraignment.