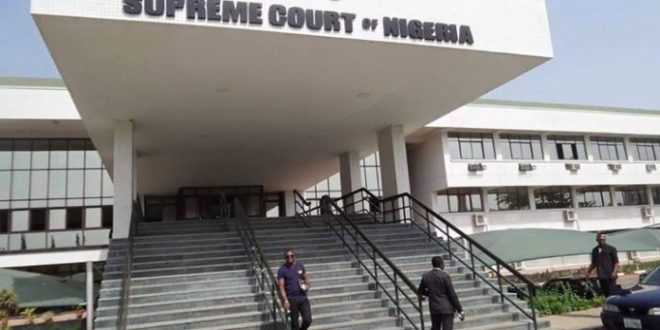 The Supreme Court, on Monday, set-aside an interim order of the Court of Appeal in Port Harcourt, which gave the All Progressives Congress, APC, the nod to conduct its Ward, Local Government and State Congresses in Rivers State.

The apex court, in a judgment that was delivered by Justice Centus Nweze, faulted the appellate court for issuing an order for the stay of execution of a Rivers State High Court order that barred the APC from going ahead with its planned congress, pending the determination of a suit before it.

It noted that the High Court had on the basis of a suit that was lodged by one Abdulahi Umar and 22 others, issued injunctive reliefs that expressesly forbade the party from conducting congress in the state.

The Supreme Court stated that Justice Chiwendu Nwogu of the high court gave the interim order of injunction on May 11, on a day that some hoodlums loyal to a faction of the APC, besieged the high court premises in Port Harcourt.

It observed that despite the attack and the restraining order from the high court, which was further reaffirmed on May 13, the APC which was a Respondent in the matter, went ahead and conducted its Ward, Local Government and State congresses on May 19, 20 and 21.

It said it was baffled that the APC, “in the most impundent manner”, ran to the Court of Appeal to apply for stay of proceeding and execution of the high court order with respect to the suit marked PHC/78/2018.

It observed that while the appellate court declined to stay proceedings of the high court, it however stayed the execution of the May 11 order by Justice Nwogu.

Dissatisfied with the decision, Umar and 22 other litigants who dragged APC to court over their alleged exclusion from the primaries, took the case to the Supreme Court.

They argued through their lawyer, Mr. Henry Bello, that the Court of Appeal engaged in judicial rascality by refusing to abide by Supreme Court decisions on the issue of stay of execution of valid court orders.

The appellants argued that the Port Harcourt Division of the Court of Appeal violated the principle of staris-decisis (judicial precedents) and accorded favourable ruling to the APC, even when it was “in grave disobedience to two orders of the lower court”.

They prayed the apex court to set aside the order the Court of Appeal in respect of the case marked CA/PH/198/2018.

Acceding to the Appellants’ prayer, the Supreme Court, held that the appellate court should not have vacated the injunctive order the Rivers state high court issued against the APC on the conduct of its congresses.

Justice Nweze held that the action of the appellate court amounted to “sacrilegious exercise of judicial discretion”, saying it committed “gross insurbodination”, by refusing to abide by precedents already set by the Supreme Court.

He said the appellate court was wrong when it judicially indulged the APC, even in the face of abundant evidence that the Party was in contempt of subsisting court orders.

“It is a very serious matter for any one to flout a positive order of a court and still approach the court for remedy.

“It is unfortunate and wrongful for the Court of Appeal to have entertained a party in contempt of a valid court order to the extent of granting judicial favour by way of staying of execution of an injunctive order when the party at the center of the dispute was in gross contempt of court”, Justice Nweze held.

Stressing that the Respondent acted “in the most impundent manner”, the Supreme Court held: “The simple truth therefore is that when the Respondent applied for stay of execution, it was in gross abuse of a court order”.

“The court guides its power jealously. Regrettably, the lower court condoled the Respondent’s conduct”. The Supreme Court therefore granted “an order setting aside the stay of execution order that the Court of Appeal granted to the APC on June 21.

“This appeal is allowed and the ruling of June 21 is hereby set-aside. That shall be the judgment of this court”, Justice Nweze held. While concurring with the lead verdict, another member of the apex court panel, Justice Inyang Okoro, held that APC’s disobedience to the high court’s order made it ineligible for favourable judicial discretion from the appellate court.

It will be recalled that the Rivers State High Court had in a ruling on May 30, nullified the Ward, Local Government and State congresses of the APC held on May 19, 20 and 21 respectively.

Justice Chiwendu Nwogu maintained that the process that led to the emergence of Ojukaye Flag-Amachree as Rivers Chairman of APC, was fraudulent.

Thus, he ordered the party to return to the status quo of May 11, pending the determination of the substantive suit. Subsequently, the court, on October 10, voided the nomination of Mr Tonye Cole as the gubernatorial flag-bearer of the APC in Rivers State.

Justice Nwogu declared that Ward congresses of APC in Rivers State were illegal, saying they were not conducted in line with the Party’s guidelines and constitution.