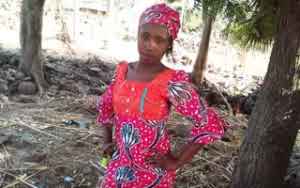 Share
The International Committee of the Red Cross has made a fresh appeal to Boko Haram to release the two remaining hostages in their custody, Alice Loksha and Leah Sharibu.
Loksha was working for UNICEF and Sharibu is the Dapchi schoolgirl kidnapped on February 19.
ICRC Regional Director for Africa, Patricia Danzi, made the appeal yesterday, more than 24 hours after the terrorists killed the second Red Cross worker in their custody, Hauwa Liman, in what the ICRC described as ”an act of despicable cruelty”.
On September 26, the terrorists had killed their first Red Cross hostage, Saifura Hussaini Ahmed Khorsa, drawing national and global condemnations.
On Sunday, the ICRC in a video made an 11th hour appeal to the Nigerian government and religious leaders to speedily intervene to save Hauwa, as the deadline for her execution by Boko Haram abductors loomed.
The appeal did not stop the terrorists from carrying out their threat.
“Hauwa and Saifura’s deaths are not only a tragedy for their families, but to thousands of people in Rann and other conflict-affected areas of north-east Nigeria where accessing health care remains a challenge.
“We urge the group holding Alice and Leah to release them safely,” said Danzi.
Hauwa, together with Saifura Hussaini Ahmed Khorsa and Alice Loksha were abducted by Boko Haram from an IDP camp in the north-eastern town of Rann on March 1.
Alice, who worked in a centre supported by UNICEF remains in captivity, along with Leah Sharibu, the 15 year old student abducted by the group from Government Girls’ Science and Technical College, in Dapchi, Yobe state, along with 109 schoolmates.
While Boko Haram freed the rest of the girls in March, they held on to Leah because she refused to renounce her Christian faith.
“The news of Hauwa’s death has broken our hearts,” said Danzi.
“We appeal for mercy and an end to such senseless murders. How can it be that two female health care workers were killed back-to-back? Nothing can justify this.
“Hauwa, 24, was full of life, become a midwife at an early age and people who knew her described her as a sociable, dynamic and enthusiastic woman who was loved by family and friends.
“She was truly dedicated to her work helping vulnerable women in her family’s home area,” she added.
Aleksandra Mosimann, Communications Coordinator, ICRC, said the organisation received the information that Hauwa was killed in a despicable act of cruelty.
Post Views: 0