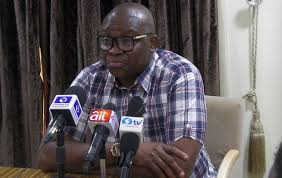 It was a shocking picture of a once vibrant and tough talking governor now reduced to jelly at the Ekiti State Government House on Sunday as outgoing Governor Ayo Fayose wept profusely while vacating the state’s number-one seat.

Fayose shed tears shortly after attending a thanksgiving service to mark the end of his tenure held at the Government House Chapel.

The governor betrayed emotion as he made for his official vehicle on his way to catching a flight at the Akure Airport.

He was believed to be on his way to Abuja in readiness for an appearance at the head office of the Economic and Financial CrimesCommission (EFCC), where he promised to appear from Monday..

As the thanksgiving service ended at about 11.00 am, tears had welled up in the eyes of the governor who sauntered towards his Lexus SUV.

His wife, Feyisetan, who sensed that her husband was weeping, moved closer to him and consoled him.

After being consoled by his wife, Fayose bade farewell to few aides and other admirers who were watching the drama.

Fayose’s voice was laden with emotion as he addressed the congregation.

The outgoing governor said he was leaving the state number-one seat a contented man.

Fayose said: “I’m contented, I’m happy and I say thank you. Don’t be disparaged, don’t worry about me, I will come back. I will rise to the glory of God. I have enjoyed uncommon grace; I will never complain but
thank God.”

Mrs. Fayose assured that her husband would come back to Ekiti a triumphant man.

She said: “We are coming back, I don’t know how but I have 200 per cent assurances.”

In his sermon entitled, “Affliction shall not rise the second time,” the Chaplain of Government House, Pastor Seyi Olusola, said a man must be ready to face affliction, if he must rise.

Olusola said: “Don’t allow anything to trouble your mind, always come to God.”

As he left the Government House premises, Fayose displayed a wooden board with the inscription “Ekiti Kete, thank you all and good bye.”

The thanksgiving service was attended by traditional rulers led by the Chairman of Ekiti State Council of Obas and Oloye of Oye-Ekiti, Oba Oluwole Ademolaju and the Ewi of Ado-Ekiti, Oba Rufus Adejugbe.

Share
Previous Nigeria’s 100-Year-Old Death-Row Inmate Seeking pardon
Next No Cause for Alarm; I will Submit Myself to EFCC – Fayose