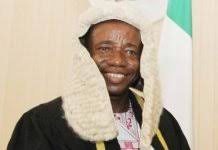 Speaker of the Ekiti State House of Assembly, Hon Kola Oluwawole and his deputy, Sina Animasaun have been impeached.

The two lawmakers were impeached this afternoon by 14 members of the house.

Subsequently, a member of the house, Mr Adeniran Alagbada, representing Ise Constituency has been installed as the new Speaker and Segundo Adewunmi has been named his deputy.

Some members of the house

Meanwhile, the former Speaker, Oluwawole,  said his purported impeachment today was a rape on democracy, noting that the action that led to his ouster was “the lowest level of lawlessness and illegality”.