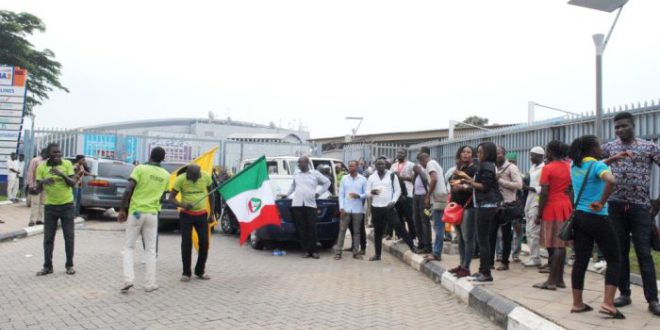 The 12 hour siege by aviation unions yesterday, continues today with more force as commercial activities were again brought unto its kneels by rampaging workers who trooped out in their hundreds to give deeper bite into the agitations.

As a result of the siege mounted on the MM2, a terminal facility owned by Mr Wale Babalakin, SAN, some airlines who were badly hit by the actions of the yesterday unrest  have moved to the General Aviation Terminal ( GAT) in order not to lose the loyalty of their passengers.

The unions had left the MMA2 terminal at around 6pm yesterday after arriving by 6am and are back as early as 6:30am worse than yesterday barricading the entrance with a truck.

ATSSSAN Deputy General Secretary, Comrade Frances Akinjole yesterday confirmed to the media that the picketing would continue today warning that any attempt to truncate the action by BASL will meet stiff resistance.

Airlines like Dana Air confirmed through its spokesman, Kingsley Ezenwa, a temporal move to the General Aviation Terminal ( GAT) managed by the Federal Airports Authority of Nigeria, (FAAN) to our correspondent.

Dana Air, Med-View Airlines Plc, Azman Airlines, Aero Contractors and Max Air who counted their losses on Wednesday may have made the choice to move to avoid further loss to their businesses

FAAN through its official tweeter handle @FAAN_Official announced Wednesday that the GAT was not affected by the ongoing strike and advised airport users to arrive early for check-in formalities.

General Manager, Corporate Affairs for FAAN, Mrs. Henrietta Yakubu who confirmed the movement by airlines told our correspondent that all the airlines have moved but Aero does check -ins from its terminal while arrival is at the GAT.

She also said cleaners and others that take care of the airport are on top of their game and are handling the GAT facility adequately.

She said: “Our facility is capable of handling more passengers and there is no cause for alarm. AVSEC are on top of security matters at the terminal having given assurance that the traffic will be handled.
She also said the car park, shops at the facility are all getting more patronage due to the traffic surge.

The unions and management of BASL had gone far in negotiations to reinstates the 20 sacked workers and forestall the industrial action only for BASL to rescind providing a counter offer and demanding that
the NCAA which had almost brokered peace between the parties was removed from the negotiation table.

Tuesday night, BASL issued a press statement which informed that a Federal High Court sitting in Lagos granted an order restraining the unions from disrupting the operations of the Murtala Muhammed Airport Terminal Two (MMA2).

That however, did not stop the action as the status quo still remains with passengers having to head to GAT to catch their flights while MMA2 remains on lockdown.