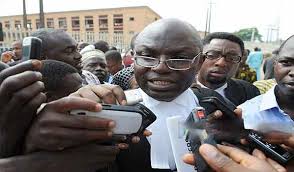 Share
The authorities of the Adeyemi College of Education, Ondo, will on Wednesday (today) October 10, 2018, confer a Post Humous Lifetime Achievement Award on the late human rights activist and patriot, Bamidele Aturu.
This is contained in a letter to the deceased widow, Mrs Adebimpe Aturu, dated September 24, 2018, from Professor Olukoya Ogen, the Rector of the College.
Bamidele Aturu is being honoured in recognition of “his contributions to the development of the College in particular and the society at large”.
The Ogbagi Akoko born Bamidele Aturu obtained a first class degree in Physics, from the Adeyemi College of Education, before proceeding to study law as a second degree, at the Obafemi Awolowo University, Ile-Ife.
An activist friend of Aturu, Ebun Olu Adegboruwa has this to say about the Award: “I commend the authorities of the Adeyemi College of Education, Ondo, for this great and deserving gesture and recognition, especially at a time when academic awards have been monetized as some form of ransom for financial and political patronage.
Surely, Bamidele Aturu lives in our minds, forever”.
Post Views: 0