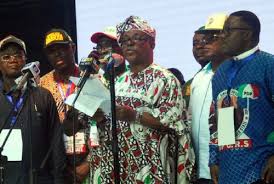 PDP Convention: We Are A Ruling Party In – Waiting Says Secondus

October 7, 2018 Comments Off on PDP Convention: We Are A Ruling Party In – Waiting Says Secondus 20 Views

The National Chairman of the Peoples Democratic Party, Uche Secondus, has said the party is a ruling party-in-waiting considering the fact that the leadership of both the Chambers of the National Assembly are under the party.

He said this on Saturday while giving his opening address during the PDP’s presidential primary in Port Harcourt, the Rivers State capital.

Secondus also stressed that the party is now bettered poised for victory in 2019 because it has learned lessons from its past mistakes.

He said, “Indeed, we have learned our lessons and by this convention, we are now set to forge a new path for our great party and Nigeria.

“Exactly 10 months after that pledge, I can, with gratitude to God and utmost humility, report to you that the PDP of today is improved, enhanced and has migrated from an opposition party to a ruling party in waiting.

“Our reformed package and our agenda, anchored on the three pillars of rebrand, reposition to regain, has been very successful, with the first two almost accomplished, while the last, regaining of power is also at the verge of being realized”.

According to Secondus, the APC has “progressively shown in all ramifications that it lacks the wherewithal to manage the country” citing what he described as failures in the areas of economy, graft and security.

He, therefore, urged Nigerians to “take back your country” by electing the PDP into power in 2019.

The national chairman also promised Nigerians an all-inclusive government if the party’s presidential candidate is elected as president.