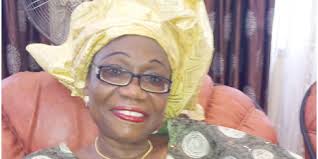 Former Minister of State for Education, Senator Iyabo Anisulowo has hinted of an alleged rift between Ogun State Governor, Ibikunle Aamosun, on one side, and Vice-President Yemi Osinbajo and the National Chairman of the All Progressives Congress, Adams Oshiomhole, on the other side.

Anisulowo who is also a chieftain of the ruling APC in Ogun and a loyalist of Gov. Amosun, dropped this hint in an interview with wherein she claimed Osinbajo and Oshiomhole are behind the crisis that has marred the party’s primaries in the state.

She told the Punch Newspaper that: “I was shocked to discover that some APC members, backed by the Vice-President and Oshiomhole, conducted another direct primary.

“He (Osinbajo) did his politics in Lagos. He came to be Vice-President from Lagos but we cannot deny that he is an indigene of Ogun State.

“But for us, I have been in politics for 35 years. We don’t know him in the politics of Ogun State. The only thing we knew about him is that he was a commissioner in Lagos State and his brother was a commissioner here in Ogun State and many times we met, they were very respectful. So, how do we feel that he would be the one that is trying to rock the boat here?”

Some governorship aspirants on APC platform have been locked in a battle with Gov. Amosun who favoured another aspirant, Hon. Adekunle Akinlade, a disagreement that has led to parallel primaries being held.

On Wednesday night, the State Governorship Electoral Committee of the party declared Prince Dapo Abiodun, as the party’s flagbearer in the 2019 general elections while in another primary Akindele was declared winner.