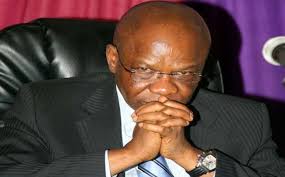 Crisis in Ekiti APC, As Arise Withdraws From Senatorial Race

October 3, 2018 Comments Off on Crisis in Ekiti APC, As Arise Withdraws From Senatorial Race 17 Views

A All Progressives Congress, APC, chieftain in Ekiti State and senatorial aspirant, Senator Ayo Arise, has withdrawn from the senatorial race over the indirect mode of primary election adopted by the party in the state.

The former senator’s withdrawal came on the heels of a similar move by Ben Murray-Bruce, a senator from Bayelsa State, who also announced his withdrawal of his participation in the senatorial primaries of the Peoples Democratic Party, PDP.

On his part, Senator Arise, a former National Assembly member, premised his resignation on the adoption, by Ekiti State APC, of indirect mode for conduct of primaries for the national and state assembly

Arise, who said it was practically impossible to mobilise delegates for the shadow election in less than 24 hours, having prepared for direct primaries for over two months, kicked against the indirect primaries election format, saying it would not reflect the people’s wish.

Despite the fact that APC National Working Committee (NWC) had directed Ekiti State APC to conduct the election through direct mode, the party in the state, on Tuesday, adopted the indirect mode, citing security reason – a decision which some aspirants protested vehemently.

Addressing journalists at his Oye Ekiti home town, Arise, who was seeking ticket for Ekiti North Senatorial District, reiterated the fact that he was not desperate for office, saying: “I believe sincerely that as democrats, we should continue to develop the system. We should not take steps that are retrogressive. Let us take steps that will deepen democracy.

The former federal lawmaker, however, said he remained a committed member of the party in spite of the reservations expressed about the adoption of indirect primaries.

Arise also said he would continue to work with other leaders of the party in the state to ensure the re-election of President Muhammad Buhari in the February 2019 presidential election.

He said: “I am not desperate to run for the Senate. I had engaged the governor-elect on my ambition several times before now.

“Before February next year, we hope to resolve all issues arising from the primaries and come back together to work for the success of our party in the 2019 general election,” he said.