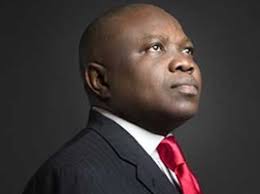 There are feelers that the politically rattled Lagos State Governor, Mr. Akinwunmi Ambode,  have open talks with Peoples Democratic Party, PDP, with the view of being the leading opposition’s party’s governorship candidate in the state.

Ambode, who is in danger of not emerging as the gubernatorial candidate of the All Progressive Congress following a groundswell of opposition against his candidacy by party members and stalwarts had made allusion to his defection in his world press congress on Independence Day where he hauled vitriol on his rival, Mr. Babajide Sanwo-Olu, calling him an ex-convict and not mentally stable and hinted of his likely defection.

A highly placed source in the All Progressives Congress, APC who spoke on condition of anonymity disclosed that Ambode is on his way out of the party claiming the governor was having underground talks with PDP leaders with the view to joining the PDP and be the party’s governorship candidate.

“For the past one week, Ambode and PDP leaders have been discussing. Even he has been promised the party’s governorship ticket,” the source said.

The governor’s fate in APC will today (Tuesday) be sealed as the party governorship earlier rescheduled holds.