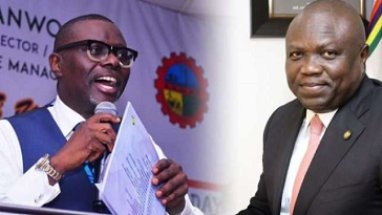 There are indications that the incumbent governor of Lagos State, Akinwunmi Ambode, is not finding it easy with Lagos electorates as his rival in the race to the Alausa seat of power, Babajide Sanwo-Olu is leading in the race to clinch the All Progressives Congress, APC ticket for the Lagos top job

Sanwo-Olu, on Tuesday defeated the incumbent Lagos State Governor, Akinwunmi Ambode in the ongoing primary election in Alausa, the seat of government.

Olanrewaju Yahaya, the electoral officer of the ward announced that Sanwo-Olu polled 960 votes ahead of the governor who secured just four votes.

In Agbado/ Oke-Odo local council development area too, Sanwo-Olu trounced Ambode with 13,380 votes while Ambode tailed far behind with 115 votes

Tinubu, a national leader of APC is a registered member in Ward C but  has not visited the ward as at press time to cast vote.

Following a reported relationship breakdown between Ambode and Tinubu, the latter was said to have anointed Babajide Sanwoolu as the next governor of the state.