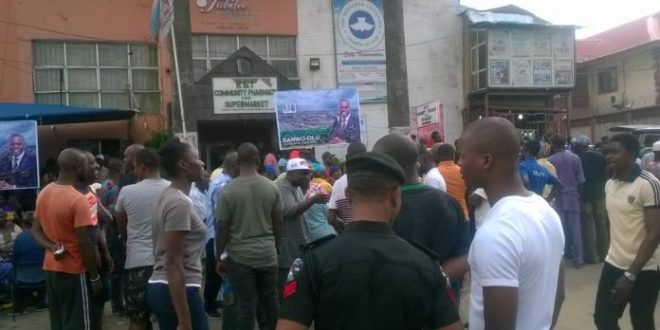 The National Working Committee (NWC) panel in charge of the All Progressives Congress (APC) governorship primary election in Lagos state has dissociated itself from the ongoing exercise.

This development came in the wake of the lingering outstanding performance of Babajide Sanwo-Olu, who is leading in the contest for the APC ticket for the governorship election coming up next year.

Results coming in from the voting centres have indicated that Sanwo-Olu was already coasting home to victory and would have won the polls in a landslide.

The committee sent to preside over the Lagos primary was said to have opposed the option A4 mode used in the election, expressing preference for secret ballot system.

Option A4, still known as open ballot, is a system where voters queue behind the agent or representative of their preferred candidates while secret ballot system is a process where a voter’s choice is confidential.

Members of the party in Lagos State have turned out in their numbers at various polling centres to elect the party’s flag bearer in the forthcoming governorship election in the state.

A former governor of Lagos State and national leader of the party, Bola Tinubu, had openly endorsed Babajide Sanwo-Olu to contest the governorship seat, citing non-adherence to the developmental blueprint for the state as a reason for his opposition to the sitting governor, Akinwumi Ambode.