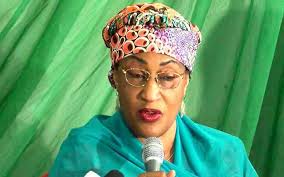 Senator Aisha Alhassan, also known as Mama Taraba, the minister of women affairs has resigned from the federal cabinet as well as the ruling All Progressives Congress, APC.

“If I am not good enough to contest elections in the APC, then I feel I am not also qualified to remain a minister in the APC government,” she said in a statement.

She thanked the president, her ward executives and other members of the party for the opportunity given her to serve.

APC National Chairman, Adams Oshiomhole said her loyalty to the party was suspect hence her disqualification.

The aspirant had openly pledged her support for Atiku Abubakar, a former Vice President and presidential aspirant on the platform of main opposition party, PDP. Buhari is seeking reelection in 2019.

Alhassan was the governorship candidate of the APC in the 2015 election in the state.