Breaking News
Home / News / Oyetola is Next Governor of Osun 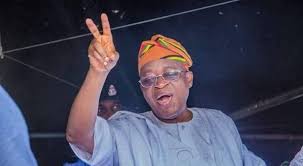 Oyetola is Next Governor of Osun

September 28, 2018 Comments Off on Oyetola is Next Governor of Osun 7 Views

The Independent National Electoral Commission, INEC has declared Gboyega Oyetola, candidate of the All Progressives Congress, APC in Osun State as the governor-elect of the state. The APC candidate scored a total of 255,505 votes while Ademola Adeleke, the PDP candidate scored a total of 255,023 votes.
The latter had led with 353 votes before the exercise was declared inconclusive and a rerun fixed for Thursday in seven polling units across four local councils. But at the end of the rerun election, which unlike the main election was reportedly characterized by arbitrary arrest or barring of party agents, journalists and observers, Oyetola won with a margin of 482 votes.
As the final collation drew to a close on Thursday, Adeleke described what was going on as a “coup”. His party had actually gone to court to challenge INEC on the rerun polls.