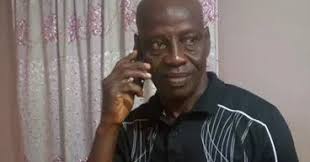 During his career, Collins was better known as Barbwire, a nickname that Stores’ fans gave him because he was attackers ‘nightmare.

“Collins slumped and died around 5.30am on Wednesday. He had slept out but was coming home to pick up his hospital card because he had an appointment with his doctor, when he slumped a few metres to his house,” a close family friend of the deceased said.

Late Collins had been ill for a while but was recuperating before his demise.

He was a member of the defunct Stationary Stores team including ex-Super Eagles goal tender and coach, Ike Shorunmu, and former international, Ajibade Babalade.