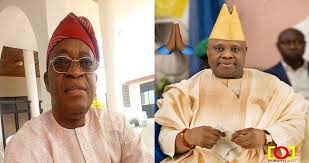 The All Progressives Congress (APC) Campaign Council for the 2018 Osun Governorship Election has urged the Peoples Democratic Party, PDP, to go to court if it disagreed with the pronouncement of the Independent National Electoral Commission on Saturday’s inconclusive poll in the state.

The council said rather than resort to threats, “the PDP should either go to court or decide not to participate in the supplementary election of September 27th”.

In a statement issued in Lagos today, the Chairman of the Council’s Media Committee, Alhaji Lai Mohammed, decried the PDP’s descent into hysteria after INEC announced that the election was inconclusive.

It described as excessive grandstanding the call by the PDP for INEC to declare its candidate in the polls as the winner.

Mohammed said PDP’s position reinforced the Council’s earlier statement that the opposition party was in the panic mode prior to the election, and that it had no confidence in the institutions saddled with organising the polls.

“What the PDP cannot and must not do, the Council said, is to engage in its trademark brigandage or to employ tactics that can short-circuit the democratic process.

”In its time, there would have been no room for a supplementary election in Osun because the PDP would have used state institutions to hijack the election proper, as it did in Ekiti in 2014. But in its deafening hysteria, the PDP pretends not to understand the real meaning of the outcome of the Osun election: That the ruling APC did nothing to prevent the state institutions that organised the election
from carrying out their duties, in the spirit of true democracy.

”Local and foreign observers have hailed INEC and the security agencies for a well-organised election. We join them in this commendation. Our confidence in the ability of the relevant state institutions involved in the Osun election remains unshaken. So also is our belief that every disagreement resulting from the election must be resolved through the democratic process, rather than a resort to threats of fire and brimstone,” the Council said.

The APC Campaign Council described as selective amnesia the jaundiced analysis by compromised, pay-as-you-go analysts, party hacks and renowned professional riggers masquerading as democrats who pretend not to remember that the APC was leading the PDP massively (by over 40,000 votes) in the 2015 Kogi governorship election when INEC declared the election inconclusive.

”Rather then resort to threats, like the PDP is doing now, the APC simply submitted to the democratic process and the supplementary election was peacefully conducted in 91 polling units across 18 of the 21 local governments in the state. Where were these emergency, ready-for-hire analysts then?” the Council queried.

It commended the good people of Osun State for deepening the nation’s democracy by eschewing violence and exercising their franchise in orderly manner all through the election process last Saturday, and urged voters in the areas to be covered by the supplementary election to also ensure a peaceful process on Thursday.