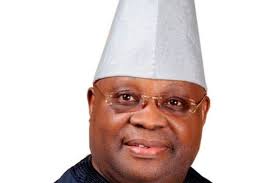 Even as there are earlier reports signaling that the PDP governorship candidate in Osun State Senator Ademola Adeleke, might have come victorious in the just concluded election, there are indications that there are last minutes finetuning going on to ensure an accurate figure is finally pronounced by the Independent National Electoral Commission, INEC.

And as the modifications persists, Adeleke has faulted the election results from Ayedaade, Osogbo and two other local government areas.

The chairman of the PDP in Osun State, Soji Adagunodo and a younger brother of the PDP candidate, Dele Adeleke, who have expressed dissatisfaction with some of the results are trying to sort out the issue with the INEC officials.

The error is not unconnected with an INEC official caught tearing the election result pasted at a polling unit in Ayedaade.