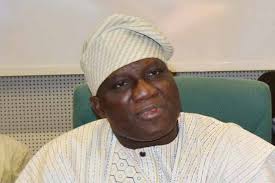 The Deputy Speaker, House of Representatives, Mr Yussuff Lasun, on Sunday, denied reports that he has dumped the All Progressives Congress (APC).

It would be recalled that a pro-Peoples Democratic Party (PDP) group in the House, under the auspices of Parliamentary Democrats Group (PDG), had described Lasun’s defection to PDP as a forgone issue.

The PDG Spokesman, Rep Timothy Golu (PDP- Plateau), while reacting to the alleged plan to remove Mr Yakubu Dogara as Speaker, following his alleged defection to the party, had said in a statement that a principal officer, including many other members had signified interest to join the bandwagon.

“As it is now, not only Speaker Yakubu Dogara, we have many other members, including a principal officer, who have signified interest to join the bandwagon. So we can effectively say that on resumption, Dogara will be presiding over a House with PDP in majority,” Golu had said.

Lasun, who represents Irepodun/Olorunda/Orolu/Osogbo Federal Constituency in the National Assembly, described the reports as the handiwork of his political detractors.

He spoke in a statement made available by his Chief Press Secretary, Mr Wole Oladimeji, in Abuja.

The statement reads: ”The defection story of Deputy Speaker of the House of Representatives, Rt. Hon. Sulaimon Lasun Yussuff to PDP is highly misleading and highly uncalled for.

”Deputy Speaker has said it repeatedly that he is a progressive to the core and remains in APC.

”It is the machinations of his political detractors, who are hell bent in maligning his political image that are spreading the rumour.

”A silence does not mean that he has left the party, the rumour recently being spread is by his political detractors.”

Corroborating Oladimeji’s statement, the Chairman, House Committee on Media and Public Affairs, Abulrazak Namdas (APC-Adamawa), said that there was no truth in the reports.

He said it was another ploy by the opposition members to destabilise the ranks of the ruling party in the House and urged Nigerians to discard the report.

”’There was nothing like that. I am telling you authoritatively that the Deputy Speaker did not defect. He has not defected and he will not defect.

”I don’t know what those spreading this rumour wants to gain, but this is a mere wish that won’t come true. The Deputy Speaker has said it severally, at different fora that he belonged here and will never contemplate leaving the party.

”He is a committed man, he has been tested severally and found to be a man of his words.

”Lasun is a member of APC, that, I am telling you authoritatively,” he said.