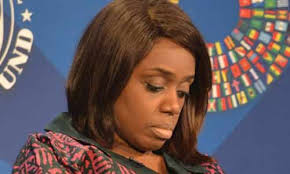 Mrs Kemi Adeosun: End of a Meritorious But Questionable Service

September 15, 2018 Comments Off on Mrs Kemi Adeosun: End of a Meritorious But Questionable Service 26 Views

That the highly cerebral former Minister of Finance, Kemi Adeosun, resigned from her office yesterday has left the rumour arena to gain dominance in public glare with her resignation letter recently being endorsed by the presidency.

The highly intelligent woman whose tenure in office recorded a lot of plus for the incumbent administration, was alleged in a publication by the Premium Times, an online newspaper, to have falsified a certificate of exemption from national service.

It started like one of those tales by moonlight, hardly believed by those following her track record as a versatile chartered accountant of note who for a long time has established herself in the United Kingdom.

But for that period of time that the accusation was being levied, a normally loquacious minister kept sealed lips, and the National Youth Service Corps, NYSC, which purportedly issued the certificate, could not find its voice. The issue became a national embarrassment. Media managers in the presidency were made to defend the image of government even as they shield a colleague who should have owned up to a mess she only should take credit for.

Discerning admirers of the 51-year old former minister found the development a pill too bitter to swallow. That feeling is right, because the woman comes across as intelligent and dedicated. An accountant and public accounts professional, Mrs. Adeosun graduated at the age of 22 from the University of East London, where she read Economics. She thereafter proceeded to do a diploma in Public Financial Management at the University of London and became a chartered accountant in 1994 with the Institute of Chartered Accountants in England and Wales.

One of the first things she brought to her office in Abuja was the Treasury Single Account, TSA, a system that allows for all revenue to be in one loop that encourages easy monitoring of revenue and expenditure of government. She had done it successfully to boost the finance of her home state of Ogun. There was strong resistance from some ministries and parastatals, but the Ministry of Finance, with the support of President Muhammadu Buhari, enforced the compliance. It was attractive to the president because it falls in line with his ace programme of war against corruption.

Under her watch, the Development Bank of Nigeria, DBN, was established with support from the World Bank, European Investment Bank and African Development Bank to get support for the growth of micro, small and medium scale enterprises in the country. Though the bank that started operation last year is yet to have much impact on the sector, it holds promise for the critical sector of an economy that was in a state of paralysis by the time the current administration took over in 2015.

Little wonder that the government was initially reluctant to ask her to bow out.

But by allowing the gains of the ministry to blur its sight to the obvious allegation of forgery levelled against the former minister, the government further have room for a dent on its credibility.

Yes, she did her best in office. But she is like the chef who prepared a good meal and while we were still savouring the taste of her cuisine, she farted. We are therefore faced with the uncomfortable situation of asking the steward to excuse us if we are to enjoy the product from the kitchen.

Below is the full text of the letter of resignation of Mrs. Kemi Adeosun as Minister of Finance after a presidential investigation confirmed that her National Youth Service Corps, NYSC, Certificate of exemption was forged.

Her letter was released by the presidency on Friday.

Let me commence by thanking you profusely for the honour and privilege of serving under your inspirational leadership. It has been a truly rewarding experience to learn from you and to observe at close quarters your integrity and sense of duty.

I have, today, become privy to the findings of the investigation into the allegation made in an online medium that the Certificate of Exemption from National Youth Service Corp (NYSC) that I had presented was not genuine. This has come as a shock to me and I believe that in line with this administration’s focus on integrity, I must do the honourable thing and resign.

Your Excellency, kindly permit me to outline some of the background to this matter. I was born and raised in the United Kingdom, indeed my parental family home remains in London. My visits to Nigeria up until the age of thirty-four (34) were holidays, with visas obtained in my UK passport.  I obtained my first Nigerian passport at the age of thirty-four (34) and when I relocated there was debate as to whether NYSC Law applied to me.  Upon enquiry as to my status relating to NYSC, I was informed that due to my residency history and having exceeded the age of thirty (30), I was exempted from the requirement to serve. Until recent events, that remained my understanding.

On the basis of that advice and with the guidance and assistance of those, I thought were trusted associates, NYSC were approached for documentary proof of status. I then received the certificate in question. Having never worked in NYSC, visited the premises, been privy to nor familiar with their operations, I had no reason to suspect that the certificate was anything but genuine. Indeed, I presented that certificate at the 2011 Ogun State House of Assembly and in 2015 for Directorate of State Services (DSS) Clearance as well as to the National Assembly for screening. Be that as it may, as someone totally committed to a culture of probity and accountability I have decided to resign with effect from Friday, 14th September, 2018.

Your Excellency, It has been an exceptional privilege to have served our nation under your leadership and to have played a role in steering our economy at a very challenging time. I am proud that Nigeria has brought discipline into its finances, has identified and is pursuing a path to long term sustainable growth that will unlock the potential in this great economy. Under your leadership, Nigeria was able to exit recession and has now started to lay the foundations for lasting growth and wealth creation. Repositioning this huge economy is not a short term task and there are no short cuts, indeed there are tough decisions still to be made but I have no doubt that your focus on infrastructural investment, revenue mobilisation and value for money in public expenditure will deliver growth, wealth and opportunity for all Nigerians.

I thank His Excellency, the Vice President and my colleagues in the Federal Executive Council for the huge pleasure and honour of working with them. I also thank most specially, the team in the ‘Finance Family’ of  advisers and heads of agencies under the Ministry of Finance. Your Excellency, this group of committed Nigerians represent a range of backgrounds, ethnicities and ages. They have worked well above and beyond the call of duty to support me in the tasks assigned. The diversity in my team and their ability to work cohesively to deliver reforms, convinces me that Nigeria has the human capital required to succeed.

Your Excellency, let me conclude by commending your patience and support, during the long search for the truth in this matter. I thank you again for giving me the honour of serving under your leadership, it is a rare privilege, which I do not take for granted. As a Nigerian and committed progressive, I  appreciate you for your dogged commitment to improving this nation.

Please be assured, as always, of my highest regards and best wishes.

Share
Previous APC Gov Aspirant: : I Don’t Believe Tinubu Will Stop Me, Says Sanwo-Olu
Next Mourinho Gives Detailed Defence On His Use Of Rashford