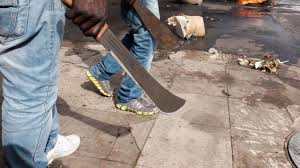 Revealed! Why Cultism Thrives in Lagos

September 8, 2018 Comments Off on Revealed! Why Cultism Thrives in Lagos 94 Views

Share
Reasons have been given for the seemingly intractable problem of cultism, leading to why the constant onslaughts against secret cults in Lagos State by the police have failed to yield the desired results.

The development followed Thursday’s re-arrest of a notorious secret cult leader, Abel Okwo, in Lagos two months after he was charged to court for cult-related offences.

The arrest, it appears, has shed light on the severe handicap being experienced by security agencies in the fight against cultism and related offences, especially in Lagos State where the menace is most prevalent.

A senior police officer who preferred anonymity, disclosed that most of the suspects arraigned for cult-related activities, especially those with powerful backers, end up being discharged for lack of diligent prosecution.

According to him, victims and witnesses often decline to testify against such suspects during their trial owing to fear of reprisal.

“Though, police usually amass sufficient evidence against the suspects, including arms and ammunition they are caught with, they still end walking free due to fear of victims to testify against them during trial. These suspects, who are further emboldened return to the streets to continue their nefarious activities,” the officer stated.

The officer who confirmed that the fear of reprisal by victims is often real, canvassed a situation where the testimonies of victims of cult-related violence are obtained in secret as this would encourage them to come forward and also shield them from possible reprisal.

He appealed to the government and the judiciary to consider this option, which he said would significantly boost the efforts of the police in the battle against secret cults.

Spokesman for the Lagos State police command, CSP Chike Oti, confirmed the arrest of Okwo and the other suspect.

He however declined comment on the call for an open-secret trial of cultism suspects. He said such concerns could only be addressed by the police hierarchy.

Oti also insisted that the current level of police action against cultism in the state had been generally effective, adding that the command was well poised to completely rid the state of secret cults.

In a related development, operatives of the command have arrested another set of suspected cultists after an initiation ceremony turned violent in Ajah on the Lagos Island, in the early hours of today.

According to a statement by Oti, 11 suspects were arrested with weapons and assorted charms during the incident.

Oti said the cultists who are members of ‘New Black Movement of Africa’ had chased one of their potential initiates to his mother’s house in Jakande Estate, after he fled the initiation ground when he could no longer withstand the rigours of the process.

He said the cultists started attacking other residents of the estate in their bid to fish out their victim.

The victim’s mother however alerted the police who mobilised to the scene and arrested some of the rampaging cultists and restored calm in the area.

Oti gave the average age of the suspects as 25.

The statement reads: “What could have passed as an ordinary initiation ceremony into a newly-formed secret confraternity named, “THE NEW BLACK MOVEMENT OF AFRICA”, a breakaway faction of the AIYE cult group, turned sour, yesterday 06/09/2018, at about 0010hrs.

“One of the recruits who couldn’t endure the torture and other initiation rites he was being subjected to, bolted for his dear life and ran to his mother’s house at Jakande estate, Ajah Lagos.

“Miffed by the apparent show of cowardice by the intending recruit and the fact that he may give them up to the police, the group chased him to his mother’s residence and began to beat up everybody in sight, at same time, robbing residents of the estate who were woken up by their noise.

“Unfortunately for the group, the boy’s mother sneaked out of the house and a placed a distress call to the Divisional Police Officer in charge of Ilasan division, CSP Onyinye Onwuamaegbu, who led a contingent of policemen to the estate and arrested eleven members of the group, who are all males.

“The Commissioner of Police, Lagos State, CP Edgal Imohimi, vows that the Command will not relent in its efforts at ridding the state of members of these unlawful societies. He therefore calls on parents to hold heart to heart talks with their children, male and female alike, on the evil consequences of belonging to cult groups.

“He also thanks residents for always providing the Command with information about the activities of these outlaws and solicits for more cooperation.”

Share
Previous Lukaku, Hazard Help Belgium Thrash Scotland 4-0
Next We know our friends, our friends know themselves By Owei Lakemfa