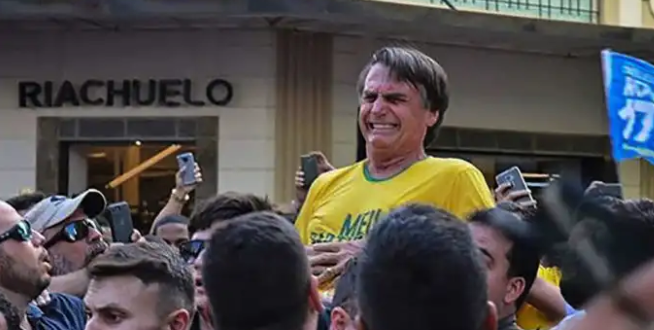 September 7, 2018 Comments Off on Presidential Candidate Stabbed During Campaign 23 Views

Share
Brazil’s front-running far-right presidential candidate Jair Bolsonaro was stabbed in the abdomen while campaigning on Thursday.
He is reportedly in serious condition and undergoing surgery, his son and a hospital spokeswoman said.
Flavio Bolsonaro, the candidate’s son, wrote on his verified Twitter account that “sadly, it was more serious that we had hoped for”.
“The perforation reached part of his liver, lung and intestine,” Flavio Bolsonaro wrote. “He lost a lot of blood, arrived at the hospital … almost dead. He appears to have stabilised now. Please pray!”
A hospital spokeswoman in the city of Juiz de Fora in Minas Gerais state, where the attack took place, confirmed to Reuters that Bolsonaro, likened to Donald Trump, was undergoing surgery but provided no details on his state nor his wounds.
The attack on Bolsonaro is a dramatic twist in what is already Brazil’s most unpredictable election since the country’s return to democracy three decades ago. Corruption investigations have jailed scores of powerful businessmen and politicians, and alienated infuriated voters.
The Federal Police said in a statement that it had officers escorting Bolsonaro at the time of the knife attack and the “aggressor” was caught in the act. It said the circumstances were being investigated.
Local police in Juiz de Fora confirmed to Reuters that a suspect was in custody, but they did not identify him.
“We do not know if it was politically motivated,” Corporal Vitor Albuquerque, a spokesman for the local police, said by telephone.
TV images show Bolsonaro being carried on someone’s shoulders in the middle of a crushing crowd of cheering supporters on one of the city’s main streets when a knife was seen raised above heads just before it plunged into the candidate’s body.
The pictures show Bolsonaro appearing to scream in pain, then falling backward into the arms of those around him. It took a few moments for the crowd to realise what occurred, but they quickly rushed the candidate out of the street.
Bolsonaro, who has spent nearly three decades in Congress, is a law-and-order candidate who routinely says that Brazilian police should kill suspected drug traffickers and other criminals at will. He has openly praised Brazil’s military dictatorship and in the past said it should have killed more people.
Bolsonaro faces trial before the Supreme Court for speech that prosecutors said incited hate and rape. He has called the charges politically motivated.
Fernando Haddad, who will likely be the leftist Workers Party presidential candidate, said the stabbing was a “shame” and a “horror”.
President Michel Temer and Bolsonaro’s electoral rivals Ciro Gomes, Marina Silva, and Geraldo Alckim all expressed outrage at the attack.
Brazil’s stocks and currency extended gains after the stabbing as traders bet the incident could boost support for Bolsonaro, who has tapped a University of the Chicago-trained banker as his main economic adviser.
*Reuters
Post Views: 0