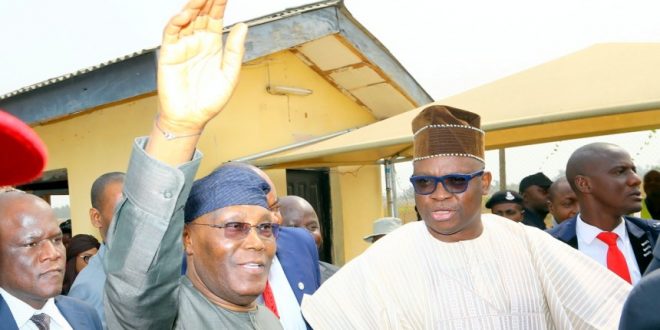 Share
Twenty four hours after former Vice President Atiku Abubakar flew in helicopter to Ekiti State on a visit to Governor Ayodele Fayose,  dust is yet to settle over Fayose duping of PDP supporters of N5m gift by Atiku in the Government House.
On landing in the Government House, Atiku was welcomed by drumming and dancing groups of supporters.
One group was composed of a political association that came with banners to welcome the former Vice President while the other was a group of mainly Fayose’s supporters.
Atiku was impressed by the warm reception by the two groups.
In appreciation, Atiku in company of Fayose while about to depart the Government House, parted with N2.5m for each of the two groups.
As Atiku hopped into his helicopter, Fayose immediately demanded for the money and, promptly, the terrified supporters surrendered the money to the governor who, to the shock of the two groups, walked away from them without giving them one kobo.
The supporters are now angry, vowing to help the opposition undo Fayose when his troubles start in the expected probe of his administration.
At joints and among party members, the cheated PDP supporters are now cursing Fayose deep and loud for his greed, which they said accounted for the loss of PDP in the last governorship election to APC.
Post Views: 0