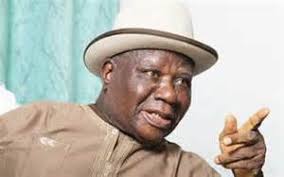 In a manner reminiscent of the 1984 raid of the Ikenne home of the late sage, Chief Obafemi Awolowo, by soldiers and officers of the then National Security Organisation, NSO, men of the Nigeria Police Force, on Tuesday, swooped on the Asokoro, Abuja home of South South Leader, Chief Edwin Clark.

The six-man squad, led by one Kolo Yusuf, claimed they obtained a search warrant from a competent court before storming the place.

Chief Clark, 91, was at home when the men from the Inspector General of Police Special Task Force from Guzape, Abuja, came calling, claiming they were looking for arms which they purported that the former Federal Commissioner for Information had stocked.

But after one hour of rigorous search, the cops left the house situated at No 43, Haile Selassie Street, Asokoro, without finding any incriminating item in the house.

The rampaging cops, from the Inspector General of Police Special Task Force, said Mr. Ibrahim Idris, the IGP, ordered the search,  The special squad reports directly to the IGP.

His words: “I was in the house, in my bedroom, when my boys came to inform me that there were policemen downstairs and in the parlour. I said what do they want? They said they came from the Inspector General of Police, IGP Tactical Squad with a warrant and with their office in  Guzape, So, I said: what do you want?

“They said I was selling weapons in my house; that’s why they went to court to obtain a search warrant and they showed me the search warrant, I said, go ahead. So they went down, searched everywhere. ,y most important part of it, my secretary, Miss Dorothy Koko,  was in the bank, (yet) they said they must see that room and her bedroom and the office. So, she had to come from the bank to open those rooms for them to search. Then, after (that), they came up, searched my wife’s room, my children’s room, my other parlour upstairs and everywhere. This is what happened.”

Asked what the policemen found, Clark said: “They didn’t find anything; they made a statement that they’ve come here with a warrant to search the house for ammunition. But they have searched the house, they found nothing and they themselves took away nothing. Three of my people signed it and three of them signed it. That’s what happened.”

Again, Chief Clark was asked if the raid may have been inspired by last week’s meeting of Elders and Leaders of various socio- cultural groups in the country, the 91-year-old elder statesman responded: “I believe because of the various meetings we’ve been holding about the state of the nation, otherwise why would they expect, am not in Delta where I come from, that militants have come to keep ammunition in my house, but no sensible man will think that a 92 year old man in Abuja, will be keeping ammunition in his house to fight the government, overthrow the government. This is ridiculous, shameful.

“I am not saying that people don’t keep arms, but I’m not that kind of person. I speak my mind on issues affecting this country, I believe in advocacy, I believe in peace. When our boys, calling themselves Avengers and so on, vandalized  pipelines, I formed an organization known as Pan Niger Delta Forum, PANDEF, to stop these boys; and I led about 100 people, including leaders, traditional rulers, everybody.

“Since then, there has been peace in the Niger Delta. Oil production has increased. Is that why I should be treated like this? Perhaps, this is the time I should mention, it has been the policy of the federal government, the presidency to congratulate Nigerians who have attained certain age. I attained the age of 91 on the 25th of May this year.

“What I said earlier on, was that I am a man of peace. I believe in peaceful coexistence in this country. I have been doing everything possible to see that Nigeria remains on. That’s why we’ve been forming various organisations to keep Nigeria together. I started PANDEF on the 19th of August, 2016, to advise the youths who were vandalizing pipelines, to stop them from vandalizing pipelines.

“Oil production in Nigeria, which had gone down low to about 900 barrels per day, has increased to over 2 million. Everybody knows that. I have led meetings with Mr. President, with our people, I led a total number of 100 traditional rulers, politicians, past governors to meet with the President on the 1st of November, 2016. I was looking for peace, but nobody can stop me from speaking my mind or associating with people to see that there is good governance in this country.

“It is dangerous to say where we are going, we are moving into a police state.  What worries me is that those who are surrounding Mr. President,  I do not think they wish him well with the way they are going. President Buhari is the President of the whole Nigeria, not one part of this country. I do not think with his greatest respect and having honored my late friend, Alhaji Maitama Sule, I do not think one policeman, whether IG (directed him or not) would have gone to Kano to search his house. Why this type of discrimination? It is very unfair.

“I will never, I said it is my top slogan that when you are 70 and above, you are at the (departure) lounge, waiting for your boarding pass.   I would say I have gotten my boarding pass, but God has delayed it(the flight to heaven). Nobody can do me anything! I will speak my mind on anything that is unjust in this country, against injustice, against oppression, discrimination, religious bigotry, ethnicity; anything that will affect the unity, peace, peaceful (co-)existence of this country I will speak against it.

Chief Clark hinted he may seek legal redress on the matter, declaring that: “My lawyers will look into that.”