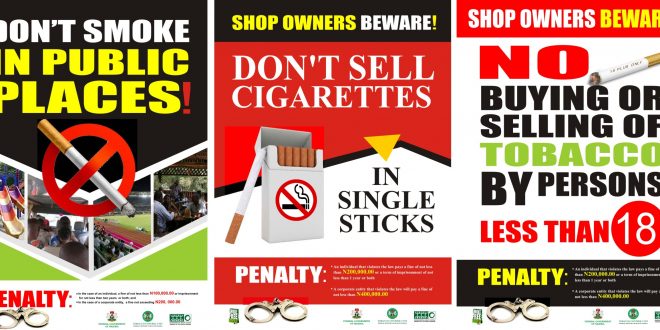 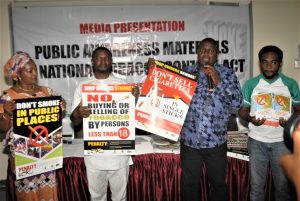 The Federal Ministry of Health in collaboration with the Environmental Rights Action/Friends of the Earth Nigeria (ERA/FoEN)  has commenced nationwide campaign to create awareness on the enforcement of provisions of the National Tobacco Control Act, 2015.

“Though ignorance of the law is no excuse, we believe that all Nigerians, including those who cannot read or write should be able to understand the law. These public awareness materials answer the critical need of ordinary Nigerians to know the provisions of the tobacco control Act through visual images and easy to read texts,” he said.

The Branch Head, Cardiovascular and Tobacco Control, Federal Ministry of Health, Malau Mangai Toma,  disclosed that the ministry had a three-pronged programme namely; education, monitoring and compliance for the effective implementation of the tobacco control Act.

He said: “We like the public to know that while creating awareness we are also beginning enforcement because enforcement is part of awareness creation. The Minister has requested all concerned agencies to begin immediate enforcement of the Law and we are following up with them.”

On her part the sub-regional coordinator of the Washington-based  Campaign for Tobacco-Free Kids (CTFK),  Hilda Ochefu,   said  the unveiling of the public awareness messages marked the beginning of  awareness campaign at the grassroots.

She commended the ministry for partnering with CSOs in creating awareness about the law saying such collaboration should extend to law enforcement agencies.

Also speaking at the event, the Programme Coordinator of the Nigerian Tobacco Control Alliance (NTCA) Mr Oluseun Esan, urged Nigerians to obey the law , pleading that  citizens should assist in drawing attention of law enforcement officers to any infraction of the NTC ACT

“Today Nigerians should know that they can lo longer sell cigarette in single sticks, it is illegal to sell cigarette to persons under 18 years, you can no longer smoke in public. That is the law and we must all obey the law”, he counselled.

The Nigeria Tobacco Control Act was passed into law in 2015. Among others, it ban smoking in public places, prohibit advertisement and sponsorship of tobacco products. It also ban sale in single sticks and sale to minors and recommended 50 % warning messages on tobacco packs.