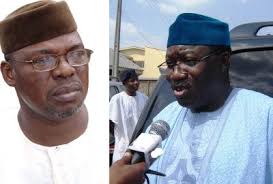 August 29, 2018 Comments Off on Ekiti Guber: Pressure Mounts on Oni to Withdraw Suit Against Fayemi 26 Views

The last may not have been heard about the Ekiti State governorship election that presented former governor, Kayode Fayemi as winner on July 14, 2018, as there are indications that a suit filed by one of the aspirants, Segun Oni, may  stand as impediment on the way of the acclaimed winner.

Oni and Fayemi both aspired for the Ekiti governorship seat under the All Progressives Congress, APC, before the latter was pronounced winner after a controversial primaries that featured well over thirty aspirants.

Oni had approached the court to challenge the eligibility of the candidature of Fayemi, a former Minister of Mines and Steel, whom he accused of failing to resign from his position as minister 30 days to the primary election as statutory demanded by the party constitution.

Already, pressure has continued to mount on Oni to drop the case that seems to be gathering weight enough to portray a possible impediment to the swearing in of Fayemi, come October this year.

The situation reached a almost unbending state with the recent gruesome and controversial killing of Bunmi Ojo, a rights activist and former Personal Assistant to former Governor Oni, who is said to be a front liner in the agitation to question the eligibility of Fayemi and secure victory for his former master through the court.

To this effect, a group, Ekiti Coalition for Change in the diaspora has joined its voice in appealing to former Governor Segun Oni to discontinue the suit over Fayemi’s eligibility to partake in the May 12 primary of the party.

Sequel to this, Oni had approached the Federal High Court in Abuja, seeking the nullification of the governor-elect’s victory on account of his refusal to resign 30 days before the primary as stipulated by the APC’s constitution.

In a statement from Washington DC, United States of America by the group’s Coordinator, Mr. Samuel Ayodele, the group appealed to Oni to play the role of an elder statesman and allow the matter not to degenerate to legal tussle that can deprive the party of victory.

Ayodele stated that the former governor should sustain his statesmanship as demonstrated by working for Fayemi’s victory in the July 14 election , saying allowing the litigation to drag on may hang a toga of someone who was acting like a fifth columnist on the former governor.

The group said nothing would profit the former governor for him to act in a manner that can rock the boat, saying the litigation may distract Fayemi from the real governance when sworn-in as the elected governor on October 16, 2018.

“We want to appeal to former Governor Segun Oni to withdraw the suit, not only in the interest of the APC, but in the overall interest of Ekiti people. We shouldn’t forget that issue of post-election litigation is a huge distraction that can deprive a leader from operating at a full throttle to develop the State.

“Ex-governor Oni was a victim of this in the past. In 2007 when he won election, Fayemi contested his victory and this really constituted serious distraction that impeded the wheel of progress and development and we don’t want such scenario to continue.

“Ekiti has been badly governed since the advent of the present administration four years ago and that was why the people voted for APC in the recent election. They needed a new lease of life. They wanted government that will be responsible and responsive to their yearnings and this litigation shouldn’t be made to be a clog in the wheel of progress.

“Former Governor Oni has always been a respectable Ekiti man with unquenchable passion for development and this litigation may reduce that respect if allowed to do damage to the expected aspiration of the people.

“This suit means many things to Ekiti people. Some were of the opinion that Oni was out to take a pound of flesh against Fayemi with this opportunity, because the governor-elect ousted him on October 15 , 2010 through judicial process.

“I want to urge the former Governor begin to maintain the high level of respect the people have for him based on his reputation and strong will in dealing with issues. This litigation shouldn’t be allowed to rubbish all he has laboured for years back,” he counseled.

Ayodele called on the national leadership of the party, led by former Edo State Governor, Com. Adams Oshiomhole to intensify moves to broker peace between the two to save the APC in Ekiti from impending doom