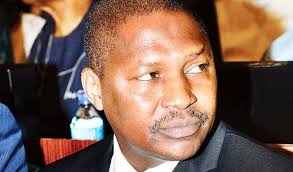 AGF Malami Under Fire, as Group Intensifies Call for Sack

August 25, 2018 Comments Off on AGF Malami Under Fire, as Group Intensifies Call for Sack 8 Views

The Centre for Anti-Corruption and Open Leadership (CACOL) has repeated its call for the sack of Abubakar Malami, the Attorney General of the Federation (AGF) and Minister of Justice over his questionable activities in office which have constituted a stain on the anti-corruption image of the Buhari Administration.

In a release issued by CACOL’s Executive Chairman, Debo Adeniran, he stated: “As an organization, we have had cause to call for the suspension and investigation of the Attorney General of the Federation, Abubakar Malami, because of his body language that seems to be very much in love with the offensive odour of corruption.

“We all recollect his overbearing role in the MTN fine of $5.2b that was later reduced to $1.7b. One of his shady activities was the role he played in the attempt to recover the $321m loot stashed away by the late maximum ruler, Gen. Sani Abacha. We recall that former President, Olusegun Obasanjo initiated the process of recovering the loot by employing the services of a Swiss lawyer, Enrico Monfrini. A report about this case  which was published by the online newspaper, PremiumTimes, is that, after about a decade, Monfrini’s law firm completed the Luxembourg part of the job in 2014 and the looted funds were domiciled with the Attorney-General of Switzerland, pending the signing of a Memorandum of Understanding, MoU, between that country and Nigeria. The MoU was to serve as a pledge that the funds would be properly utilized.

“Monfrini was paid his legal fees by the Nigerian government long before the appointment of Malami as Attorney General because he (Monfrini), completed the necessary legal work for repatriation of the loot. All that was left after the MoU was signed was a government to government communication for the money to be repatriated to Nigeria.”

According to Monfrini himself: “‘It is a matter which is normally dealt with by government and which does not entail the engagement of any lawyer.’

“Despite this, Malami on assumption of office in 2015, employed the services of two lawyers (who were believed to be his cronies), to perform the same assignment that had been completed by Monfrini’s law firm for a fee of $16.9m -an amount reportedly higher than what Monfrini himself was paid in the original contract. The two lawyers -Oladipo Okpeseyi and Temitope Adebayo- were both former colleagues of Malami at the defunct Congress for Progressive Change (CPC), President Buhari’s former political Party where Malami was the National legal Adviser. It is on record that while reacting to the controversy trailing the appointment of the lawyers and a law suit instituted after repeated Freedom of Information requests on the matter by the Cable Foundation, Malami claimed the fresh contract was  necessitated because Monfrini charged Nigeria 20 percent of the recovered sum as against the expected 5 percent, a claim that was immediately debunked by Monfrini.”

The CACOL boss added: “Though the Cable Foundation has since gone to court to prevent Malami from effecting this shady payment, we demand for instant  sack of Malami as the nation’s chief law officer for this attempted fraud.”

We are also aware of several other illegalities he has been embroiled in despite being the nation’s Chief Law Officer.  They include:

“All of these and many more have violated his constitutional roles, especially in the tripartite responsibilities of ensuring public interest, interest of justice and compliance to legal processes.

“We therefore call for his immediate removal and investigation for many of the above-stated atrocities that continue to cast a pall on the Muhammadu Buhari administration on all fronts, especially on his anti-Corruption crusade”.