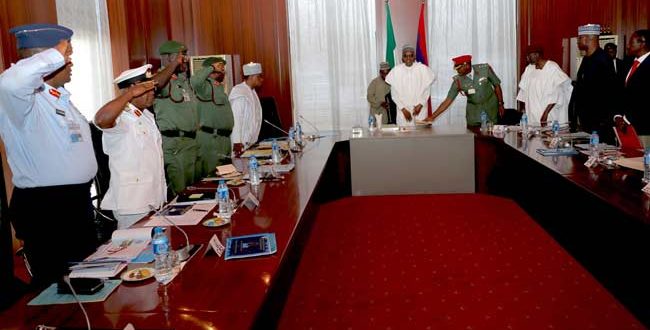 President Muhammadu Buhari officially resumed duty on Monday and is presiding over a meeting with the security chiefs.

The President is meeting with the service chiefs inside the Presidential Villa in Abuja, two days after he returned to the country from his vacation in the United Kingdom.

The meeting has in attendance the Chief of Defence Staff, General Abayomi Olonisakin, and other security chiefs.

Also in attendance are the Minister Of Defence, Mansur Dan-Ali; Secretary to the Government of the Federation (SGF), Mr Boss Mustapha; and the National Security Adviser, Babagana Monguno, among others.

It is the first security meeting President Buhari is holding since he returned from London on Saturday.

It is also Mr Seiyefa’s first meeting with the President since he took over from former DSS DG, Mr Lawal Daura.

Share
Previous NBA Elects Paul Usoro As New President
Next Saraki: Tinubu Is Peddling Falsehood Against Me , Because He Wants To Be President in 2023