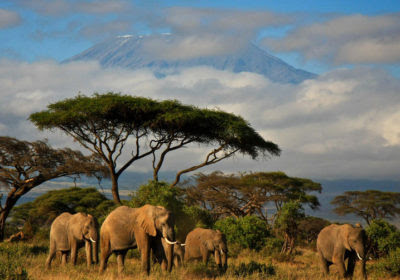 Tourism: 8 of the Best Safari Destinations in Africa

August 14, 2018 Comments Off on Tourism: 8 of the Best Safari Destinations in Africa 103 Views

There are many game reserves to choose from.
With so many spectacular game reserves to choose from, determining the ultimate once-in-a-lifetime African safari experience is no easy task for travelers.
From Tanzania’s protected Serengeti National Park, to Botswana’s brutally wild Kalahari Desert, here’s our pick of eight of the finest national parks Africa has to offer.

Serengeti National Park, Tanzania
Serengeti National Park is Africa as you always imagined it, a pristine landscape of swaying savannah, dotted with flat-topped acacia and speckled with great roving herds.
The Serengeti is the setting for the Great Migration (normally from June to July and January to February,) considered the greatest wildlife spectacle on earth when over two million wildebeest, zebra and gazelle chase the rains.

A UNESCO World Heritage Site, this area offers the same sort of phenomenal predator sightings that you’d expect from the neighboring Masai Mara National Park in Kenya (part of the same ecosystem,) but lion and cheetah chases at Serengeti are often enjoyed without another vehicle in sight.
Some visitors might be frustrated by the great expanses of plains to be covered between sightings, but the feeling of being just a dot in the immensity of Africa is part of the appeal.

For first-timers: Safari novices might want to consider starting their Tanzania trip with a day or two at Ngorongoro Crater, where the Big Five (lion, elephant, buffalo, rhino and leopard) are often all visible in a single morning’s game drive. After that the pressure is off — they can sit back and take the thrill of the Serengeti as a bonus.

For old hands: Allow more time for the Serengeti to really get under your skin and head for the less visited areas near Namiri Plains or around the Grumeti River. An often-overlooked alternative to the Serengeti is Tanzania’s Selous Game Reserve, which offers world class lion and painted dog (or wild dog) sightings.

Tag on incredible animal sightings and tiny visitor numbers, and you have a winner.
The voracious Kidepo lions prey on roving herds of more than 4,000 buffalo (the total population in the park is said to be about 13,000) and you will often see herds of elephants moving majestically along the valleys.

The park’s isolation is off-putting for many, but the 12-hour road trip from Kampala, Uganda’s capital, (or a fairly expensive private charter flight) is a small price to pay to discover one of Africa’s genuine hidden gems.

For first-timers: If the journey to Kidepo is not appealing, Murchison Falls National Park is hard to beat for the sheer drama of the falls themselves and for the easy wildlife viewing from cruise boats.

For old hands: Even for those who’ve seen everything else that Africa has to offer, Uganda is perhaps the best destination on the planet for ape watching. Gorilla viewing at Bwindi Impenetrable National Park is a life-changing experience and chimpanzees can be tracked on foot at Kaniyo Pabidi.

It has the greatest concentration of big land animals anywhere on the planet, yet sees so few tourists that the vast elephant population (roughly 46,000) outnumbers foreign visitors by almost 200 to one.

For first-timers: Combine with a lakeside vacation at Lake Kariba or an introductory safari at Zambezi National Park which, despite its diminutive size, offers a chance to see elephant, giraffe, buffalo, hippo, crocs and even lion within a stone’s throw of the legendary Victoria Falls.

For old hands: Mana Pools National Park has incredible density of wildlife and (guided or unguided) canoeing and walking activities provide a burst of adrenalin for even the most dedicated wilderness thrill seeker.

The Samburu people (frequently confused with their southern cousins, the Maasai) offer a similarly colorful cultural appeal in what was once Kenya’s Northern Frontier District, but few villages see many visitors and the Samburu’s sense of hospitality remains legendary.
Apart from the premier league wildlife sightings that draw most visitors to southern Kenya, Samburu National Reserve is also home to an impressive “second division” which local guides call the Samburu Special Five (featuring Beisa oryx, reticulated giraffe, Grevy’s zebra, Somali ostrich and the elegant gerenuk antelope.)

For first-timers: The Masai Mara National Reserve — sometimes called “the greatest wildlife real estate on Earth” — is a must-see sight for any wildlife fan.
Rather than placing an emphasis on staying at a camp in the center of the (unfenced) park, it’s worth considering staying on a private concession which can offer experiences such as walking safaris and night drives featuring the same wildlife but with a level of exclusivity rarely found in the heart of the world-famous Mara.

For old hands: The 150-kilometer long Matthews Range is barely known, yet this jungle-clad “island in the sky” has been described as a “biological bonanza,” a place where you can walk in the presence of lions, buffalo and the world’s densest concentration of melanistic black panthers.

Kalahari Desert, Botswana
Traditionally known to the San Bushmen as Kgalagadi, The Great Thirstland, the Kalahari Desert represents Africa at its most brutally wild.
The 52,800-square-kilometer-long Central Kalahari Game Reserve is a challenge to access and, because of the aridity, wildlife tends to be more spread out than in the other great parks in the region.

This is a land of pure adventure, however, and encountering herds of majestic gemsbok on the shimmering mirages of Deception Valley or camping amid the guttural roar of the local lion pride near Tau Pan (meaning Lion Pan) is sure to provoke a feeling of privilege.
There are no facilities in the reserve you need a tour operator with experience in leading 4×4 convoy to access this region.

The logistical complications are invariably amply rewarded, however, by the adventure of a lifetime.

For first-timers: For an insight into the diversity of Africa, there’s nothing better than a two-stop safari combining the shimmering pans of the Kalahari with Okavango wetland wilderness. Moremi Game Reserve probably presents the most convenient safari option (along with prodigious wildlife) in the delta.

For old hands: Northern Tuli Game Reserve is one of the unknown gems of Southern Africa. On offer is mountain biking, walking and even horseback riding through stunning landscapes of the mopane and fever tree forests, watching herds of up to 400 elephants and enjoying what might be the best leopard sightings in the world.

Meanwhile, giant Kafue National Park, which is twice its size, draws safari connoisseurs with its phenomenal lion and leopard sightings and incredible diversity of antelope species, many of which are rarely seen elsewhere.

With the exception of rhino, the Big Five are relatively common fixtures here. Lions and cheetah are often seen hunting on the Busanga Plains, and you have a chance to spot leopards and painted dogs from a boat on the Lufupa River.

Zambia (along with Zimbabwe) is known for some of the best guides in the business and walking safaris and night drives are activities you can enjoy here that rarely feature in national parks in other areas.

For first-timers: Even in Africa, good things sometimes come in small packages. Mosi-oa-Tunya National Park (one of Zambia’s smallest) is more of a sanctuary than a park, yet it boasts the Big Five and a lot more besides. Visitors can even walk among white rhino.
For old hands: Lower Zambezi National Park offers heart-stopping views of hippos and huge crocs from the vantage point of a canoe on the mighty Zambezi River.

While Namibia falls short from its neighboring countries for sheer wildlife density, it does offer wonderful sightings of desert species, along with perhaps the best chance to watch the region’s iconic cheetah in fleet-footed action.

Etosha National Park is undoubtedly the star of the country’s wildlife line-up, but it can get busy during the dry season (from July to September) when the wildlife concentrates closer to the waterholes.

Affordable camps and well-maintained roads and tracks make this one of the best options for self-drive safaris, and floodlit waterholes (like Okaukuejo in the southwest) offer an unusual opportunity to watch lions, hyena and even black rhino at night.

For first-timers: Skeleton Coast National Park is named after the many shipwrecks that form a lacework of tangled iron along the eerie 500-kilometer stretch of windblown desert dunes. Rather than a classic wildlife park, the Skeleton Coast offers a unique opportunity to see immense colonies of up to 100,000 Cape-fur seals, along with herds of migrant desert animals.

For old hands: Zambezi Region (formerly known as Caprivi Strip) provides a crossing point for wildlife from Namibia, Zambia, Botswana and Zimbabwe but it is a challenging safari, best undertaken in a convoy of 4x4s.

With diverse wildlife, including the Big Five (with an estimated 1,500 lions but heavily threatened rhinos,) Kruger’s excellent road network means that most areas are accessible even with two-wheel drive vehicles.

Often derided for being “tame wilderness” because of tarred roads and good infrastructure, this huge park measures 414 kilometers from Crocodile Bridge in the south to Pafuri Gate in the north — for added wilderness appeal it is recommended to head farther into the less-visited tracks and trails of the north.

For first-timers: For the independent traveler with a hired vehicle, Kruger is arguably the cheapest and most accessible of all Africa’s major parks. Sabi Sand Game Reserve shares a 50-kilometer unfenced border with Kruger National Park and it benefits from incredible wildlife viewing (along with possibly the best leopard spotting in the world.)

For old hands: Phinda Private Game Reserve in KwaZulu-Natal offers some of the best cheetah sightings, huge leopards, a rare chance to see both the black and white rhinos and a bird list of well over 400 species.