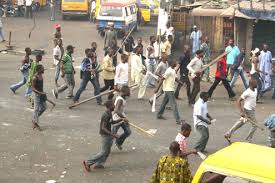 Ado Again! Many Wounded as Drivers Clash Over Leadership

August 14, 2018 Comments Off on Ado Again! Many Wounded as Drivers Clash Over Leadership 37 Views

Sporadic shootings ruled the air in Ado-Ekiti, the Ekiti State capital, on Tuesday as members of the Road Transport Employers Association (RTEAN) were locked in a bitter struggle for the leadership of the body.

There was panic in the city for several hours as many residents were reportedly wounded during the clash.

Loyalists of the incumbent chairman, Samuel Agbede and former chairman, Rotimi Olanbiwonnu, reportedly launched attacks against one another following the takeover of RTEAN motor parks by supporters of the former.

Areas like Okeyinmi, Old Garage and Ijigbo were turned to war zones by the rampaging drivers as several gunshots rent the air sending many residents scampering to safety.

The mayhem forced shop owners in the areas to hurriedly close for the day and headed home to avoid being caught in the crossfire by unionists.

Many residents sustained injuries in a bid to escape from the scene while traffic came to a standstill as motorists and motorcyclists diverted to other routes.

Armed policemen were drafted to the flashpoints of violence while many people were said to have been arrested.

Crisis has been rocking RTEAN following the discharge and acquittal of Olanbiwonnu and six others who were on trial for alleged complicity in the murder of former National Union of Road Transport Workers (NURTW) Chairman, Omolafe Aderiye.

Aderiye was killed on September 25, 2014 and the trial of the accused persons at an Ekiti State High Court ended on January 27 when they were set free after nearly four years in prison custody.

The latest violence was reportedly sparked by the alleged arrest of Olanbiwonnu by the police which his loyalists believed was another attempt to detain him perpetually.

Reacting to the mayhem, police spokesman, Caleb Ikechukwu, claimed that nobody had been arrested at press time.

Ikechukwu, a Deputy Superintendent of Police, said the situation has been put under control while the warring factions have been invited to ensure peace.