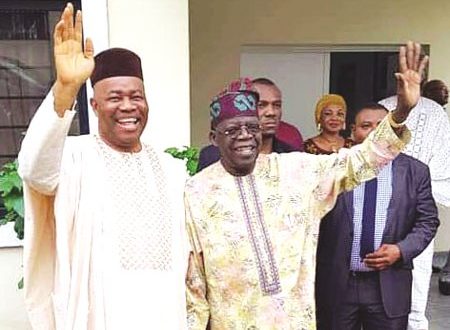 At last, the much speculated defection of the Senate Minority Leader, Godswill Akpabio from the Peoples Democratic Party, PDP to the ruling All Progressives Congress, APC, took place today At Ikot Ekpene, Akwa Ibom State .

Akpabio formally declared his new alliance with the APC at a mega rally held at the Ikot Ekpene township stadium on Wednesday and declared that he is taking the state to the centre.

In his remark, Senate Majority Leader, Ahmed Lawan said: “This defection surpasses all other defections.

“This is a defection that has shaken the opposition Peoples Democratic Party (PDP).

“They followed Akpabio everywhere to prevent him from defecting but he ignored them.’’

He described Akpabio as a nationalist who believes in the administration of President Muhammadu Buhari.

The crowd that witnessed the defection at Ikot Ekpene township stadium on Wednesday was huge.

The National Women Leader of APC, Salamatu Umar, described the crowd as unprecedented.

“Nigerian women are proud of Akpabio,” she said.

She praised Akpabio for the transformation that has taken place in Akwa Ibom.

Fifty five-year-old Mr Akpabio is a lawyer and politician who was also Governor of Akwa Ibom State of Nigeria from May 29, 2007 to May 29, 2015.