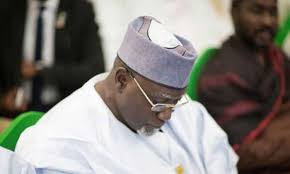 Acting President Yemi Osinbajo has appointed Matthew B. Seiyefa as the Acting Director of the Department of State Services, DSS, following the sack of Lawal Daura.

The Presidency said Seiyefa will act in the position until further notice.

This is happening just as the dismissed Director General of the DSS, Daura, was, arrested and detained shortly after his ouster, on the order of the Acting President, Prof. Yemi Osinbajo.

According to reports, Daura was nabbed moments after his sack for “breaching national security”.

The Daura, Katsina State-born ousted DG was relieved of his post shortly after he met with the Acting President at the Presidential Villa for what Laolu Akande, Senior Special Assistant (Media and Publicity) in the office of the Vice President described as “a gross violation of constitutional order, rule of law and all acceptable notions of law and order.

“The unlawful act which was done without the knowledge of the Presidency is condemnable and completely unacceptable,” Akande had said in the statement.

“By this statement,” he had continued, “Professor Osinbajo is consequently assuring Nigerians that all persons within the law enforcement apparatus who participated in this travesty will be identified and subjected to appropriate disciplinary action.”